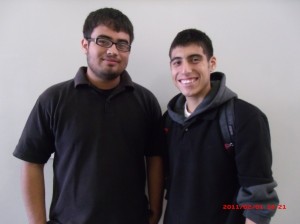 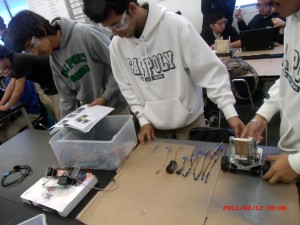 Group of robotic students are working hard to get their robot done. 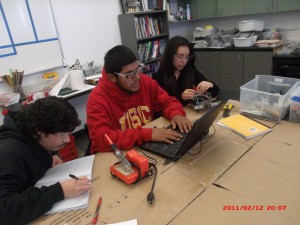 Edgar Montes is programming the robot so it can move on its own. 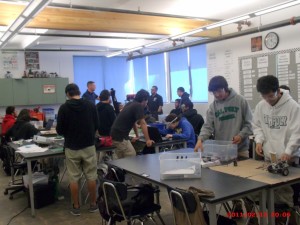 The class has begun and the robotic students are starting to construct their robots. 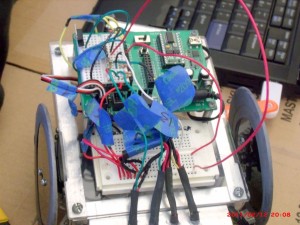 Over the past years, Ánimo Pat Brown has a perfect record in robotics competition. This year’s Robotics class has to carry on that tradition. Every year the robotics students have a challenge to win these competitions. Students here at APB always have the pleasure to do that.
The Robotics class of 2013 will go against the Robotics class at Ánimo Locke Tech on January, 2013 here at Ánimo Pat Brown. The thing is that students that are not in this class do not know the stress and hardships every group has to go through even if the robot has good construction, a good program and/or good wiring.
If Robotics students do not get ahead of their deadlines and wait until the last moment to complete a deadline then they will not succeed in completing the robot. If the robot is not complete or does not function by the end of the semester then that group will get an automatic F .
The same goes if the students lose the competition then they get an F according to Andrew Osterhaus.
This motivation from Osterhaus is driving groups to succeed and achieving their deadlines on time. “I like it. It gives reason for students to work hard. Gives an incentive. Students want to do well in the competition.” said Robotics teacher Andrew Osterhaus. He believes that if the students put their all into their robot then they will do well in the competition.
In the Robotics class it takes a lot of work and time in order to complete and have a working robot. You need a lot of supplies like sensors, metal, and plastic. Some supplies are provided by Osterhaus like wire and screws but most of the supplies need to come from your own pocket.
Some of these supplies are like extra metal or wheels that are needed to go on the robot. But the most important supply that the students need, besides a working robot, is a engineer notebook.
An engineer notebook needs to include any and every action put into the robot you build, even if they are mistakes you have to include in the notebook. He checks if you have a wiring key, a key on how your wires look and to make sure which wire goes into the robot to make it work, and sees if those sensors are in the right place. If you take off all the wires you would have to be able to put it back together with the wiring key.
Now you may ask “how can the robot move?” The way how the robot is moved is by a basic stamp that is basically the brain of the robot. The basic stamp is a place where you can type a program code which can make the robot move without using a controller.
But making the robot move is not the simplest job. It is the construction that makes it difficult. You need to know where everything needs to go and how it is going to work.
Students in the Robotics class are a bit nervous about the competition because they feel that Ánimo Locke Tech is good. “Ánimo Locke Tech are going to be tough because they show up to school on Saturday. For me I am a little nervous because their robots also may have better constructions but I know we can beat them and we can win the competition.” said Senior Yesenia Gonzalez. She believes in the Robotics class and that they can win the competition.
Some other students say that this competition is good for the students. “I think the competition is something that will challenge us and benefit us.” said Senior Arturo Gutierrez.
For the students it will be tough for them but when the times comes they will be ready for the competition and be ready to win.
In the Robotics class, no matter if you meet the deadlines and complete deadlines ahead of time you will struggle no matter what. You will struggle to put on sensors, to sense surroundings according to what you program them to do. Many things will go wrong if the sensors are not checked frequently and later you find out you have a faulty wire.
At the start of the semester the Robotics students learned how to program and how to wire everything on the basic stamp. Everything was difficult for the students at the beginning but over the year the students have gotten the idea and some students have mastered how to do these basics. But other still struggle to figure it out.
“ It makes me nervous because I don’t really know how the robot works. And what if I make a robot that has a good construction but the robot does not function as good.”said senior Oscar Duque. He is explaining that it can be complicated at times when wiring but that’s part of the Robotics class.
Many problems can occur when building your robot. Most of the students in the class are having trouble but when the competition comes the whole class is going to be ready to take down Ánimo Locke Tech.
The students in robotics have a lot of work to do when the competition comes near to the point where we all have to be ready.
“From what I have heard I think its gonna be a good competition and some groups in our school will probably lose and some will win overall its a 50% chance we will win or lose “ said senior Melvin Fuentes.
In conclusion the Robotics class of 2013, are ready and determined to win this competition versus Ánimo Locke Tech.