Gas prices have had a big change and are affecting many people’s daily lives; people are stressed and overwhelmed.

By Andrew Benitez and Ada Gonzalez 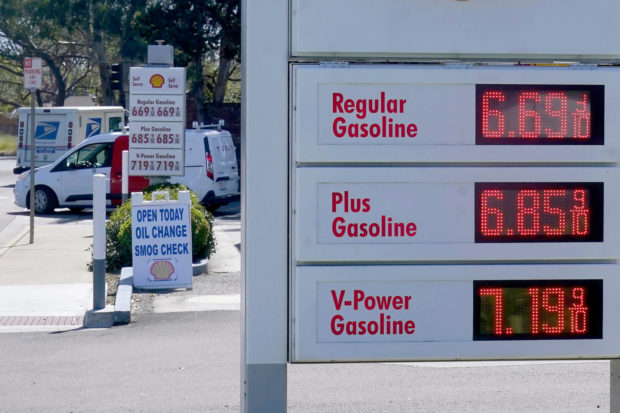 In California, the last couple of weeks, gas prices have gone up to $5.74, more than a dollar causing very drastic changes to residents in their day by day lives.

The reason for this drastic change in gas prices is because a change in value of crude oil has become more expensive. An article published on March 26 by the International Business Times called “10 States with the Cheapest Gas Price” says “Prices for gasoline first saw an increase in early 2022 due to a lack of oil supply.”

Another reason that gas prices have continued to go up is because the United States gets 3% of crude oil from Russia, but due to the war between Russia and Ukraine, Biden has decided to ban the transportations of oil coming from Russia. Biden has said that buying oil from Russia is helping them to pay for war expenses.

In the month of March, oil had reached about 58% increase and the retail gas went up to 24% for the same reason that the U.S stopped buying oil from one of the top oil productions (Russia).

“I think it is because there is high demand for gas (Californians drive a lot, we don’t have amazing public transportation) and we have higher gas taxes to pay for our roads and environmental programs. We also don’t have many toll roads which other states use to raise money while keeping gas cheaper,” 12th grade College Readiness teacher, Mr. Pickering said.

This has made the jobs for Uber drivers or truck drivers more of a hassle in managing the amount of money they make compared to how much they use for gas. Every working class family is affected by this inflation causing them to reorganize their lives in ways where they must save their gas as much as possible.

There are some states that are not facing this inflation of gas prices such as “Kansas, Missouri, Oklahoma, Arkansas, Nebraska, North Dakota, Iowa, Minnesota, South Dakota, and Colorado” according to the  International Business Times. These states’ gas prices range from $3.82- $3.97.

Ultimately this is causing many to waste more money on gas, leaving them with less money for buying goods or other items. The amount of gas prices are seen to be affecting a lot of families of at least 6+ people. It is already very difficult but the cut back in basic needs makes it 10 times more challenging.

“It has changed drastically because I have reorganized my whole lifestyle in order to feed my whole family which is about  8 people so it’s kinda hard to go places in order to save money,” Anatomy and Physiology teacher, Ms. Diaz said.

The increase of gas prices are causing there to be more troubles to those who need to drive to work on a daily basis, it seems as if their pay check is only going into filling up their gas tank weekly.

Mr. Pickering said, “It is basically a pay cut because 80% of my driving is to and from work, so more of my paycheck is going to just making it to work.” 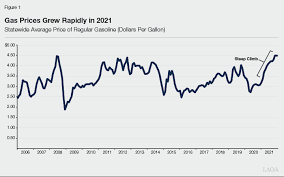 This image is a graph that is shows the increase and decrease of gas prices over the last 16 year./ Legislative Analyst’s Office

Many people now have to use more money in order to be able to fill up the gas tanks in their vehicles. This is a big disadvantage because it takes money away from other important resources like food, home bills, and basic home necessities.

Depending on what kind of car you have, the amount of extra money you need to put into the vehicle varies for every person. A factor that can contribute to how much more money is needed is if your car is big or small, if it has to be fueled up every 2 to 3 days, etc.

In addition Mr. Pickering said, “Gas prices in my neighborhood are about $2 more than they were a year ago so it is costing me about $25 more dollars each time I fill up (which is once per week).”

The amount of money used in filling up gas can also vary if an individual drives very often or if they constantly have to refill their gas tank. Gas prices also vary based on the age difference because it is known that teenagers like to go out more than adults do today.

“When gas wasn’t as expensive I used to put  40 dollars to fill my gas tanks. Now, if I put a full tank it only gets full with $70 almost $80,” APB senior Juan Martinez said.

This is causing the lives of everyone to change in different ways. People who work further away from home may start to find it more difficult to support themselves and their families.

A way that may help to save money for gas would be to use public transportation such as trains, buses, etc. It may not be the most efficient or convenient way but it will for sure keep some extra bucks in your pocket.

Some people have gone to the extent of getting an electric car in order to not need to pay $5/per gallon for their vehicle/s. Others do not have the same opportunities to go and buy an electrical car to avoid the gas prices.

Ms. Diaz said, “I used to go to many different far places to visit family and friends but it has been changing in order for me to save money for gas and for food, my kids always ask me where we are going but I have to keep it local.”

For others, they have had to find a way to minimize the usage of their car in order to save some money from always needing to fill up their gas tank, especially if there is more than one vehicle per household. This can really impact everyone in the household because they have to constantly refill the tank.

“My wife and I are trying to carpool more and I am super happy I don’t have kids who need to go to soccer practice, etc,” Mr. Pickering said.

At the beginning of the pandemic, despite the shortage of oil and fuel gas prices did not increase because people were afraid to travel or to go anywhere in general. If people were to travel less today it can possibly lower the prices of gas because there will be about a thousand people or more who don’t need to be at the gas stations so often.

We asked the people that we interviewed if they have heard about any possible solutions that have been announced to the public.

“I have heard some politicians suggest sending each California driver $400 to offset the price of gas. Others want to repeal the gas tax, which would lower the price of gas but also take away money from environmental programs,” Mr. Pickering said.

Overall inflation can make a big difference in everyone’s lifestyle, affecting them mostly economically, therefore we must stay alert to any changes that may be announced or declared throughout this time. In the meantime we should be more conscious of how to manage our money in order to not complicate your life anymore.