Students have united to continue fighting to defund school police by distributing hundreds of pins to 50 LAUSD schools, inciting debates about police presence on school grounds. 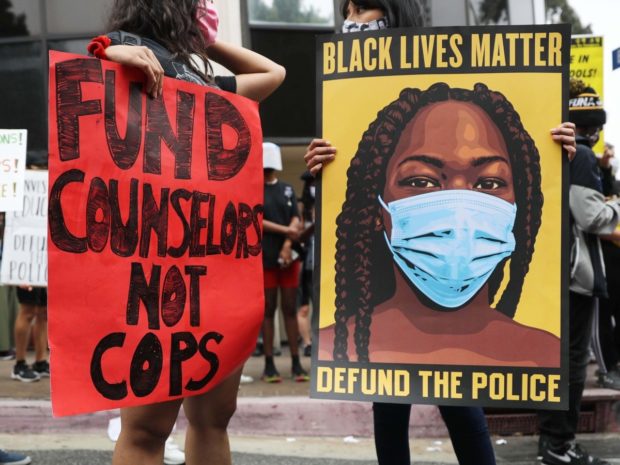 One controversial issue in LA school districts is to abolish the school police because many claim that it negatively affects children of color, while others argue that school police should stay on campus because they keep schools safe.

Recently in Animo Pat Brown, students have distributed pins and flyers supporting that LAUSD schools should defund school police completely and use the money for better educational resources– primarily for children of color.

There was no conflict at Animo Pat Brown for distributing these items, but there have been in other schools. According to LAist, in early March, a school in West Athens experienced an event where a junior by the name of Destiny Tillear was called to the office and told by their principal that she is not allowed to distribute those items.

Destiny Tillear established her rights as a student that she was doing nothing wrong and was, in fact, allowed to distribute them during lunch. She claimed that even though she knows she did nothing wrong, it felt like it because of that event.

There were hundreds of pins created to distributed to 50 LAUSD schools to pressure LAUSD to defund LA school police 100 percent and not just a small percentage.

A year ago, the LAUSD police budget was cut by $25 million but many students are fighting for abolishing the school police completely and keeping them off school campuses.

The main argument against school police in LAUSD schools is the correlation between them and the school-to-prison pipeline. According to the American Civil Liberties Union, the school-to-prison pipeline is where children are often punished in school and ultimately find themselves going to juvenile detention and down a path of criminal activity. Victims of this broken system are often children of color, especially Black children. 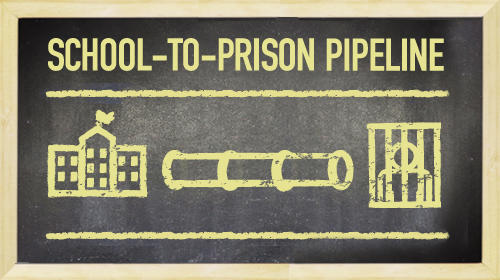 A visual of what the school-to-prison pipeline looks like./aclu.org

“There is definitely a connection between the school-to-prison pipeline and school police because police officers often target black children, but also LGBTQIA+ children,” said Jennifer Herrera, an APB senior who is very informative on this subject and social justice as a whole.

In addition, Black children experience policing and harsh punishments as young as 9 years old, or younger, even. Despite staff members and counselors being there to help students when they do something wrong or experience conflict, police officers usually handle the situation because of their immense presence on school campuses.

“I went to a middle school that had lots of random searches with police officers and even police dogs. It was psychologically traumatizing, especially for younger children,” Jennifer said.

What could’ve been handled differently through a conversation with a counselor later becomes a situation of a young child in cuffs.

The opposing side of this argument is that school police protect schools from dangers and should therefore be kept on campus to keep faculty and students safe. This can be keeping students safe from outside attacks, gangs, weapons on campus, and other dangerous situations that can be present on a school campus.

However, according to the LA Times, 25% of Black female students and 20% of Black male students do not feel safe with police on campus. The percentages with parents are similar as well, contradicting the idea that police officers keep schools safe when children themselves are weary of them.

One side wants to maintain the high budget for keeping school police on campus while the other side would rather defund the school police completely and invest in programs and opportunities to invest in education enrichment programs.

“I believe that the money should go more towards counseling. Behavioral issues usually stem from mental health issues and should be tackled with more effective counseling and bringing more mental health awareness in schools,” Jennifer Herrera said.

An interesting approach to this controversial problem is a decision made by the Pomona Unified School district where they claimed that they support student’s fight of LAUSD defunding schools completely.

However, they still hired two police officers in a school who would be trained with the abilities to help students with “restorative justice practices, procedural justice, trauma-informed practices, diversity and de-escalation,” said Private Officer Magazine.

The school board agreed to this decision but has yet to be approved by the city council of Pomona. Jennifer gave insight about this decision.

“To defund school police is complicated, and the response is not really effective because the presence of school police officers on campus can negatively impact children, especially children who are undocumented,” Jennifer said.

The fight for this change has resulted in cutting a third of police officer positions on LAUSD school grounds and bans the use of pepper spray as of last year.

This conflict arose more since the Black Lives Matter movement and the deaths of George Floyd and Breonna Taylor, two prominent figures of the movement that ignited many to speak up about the discrimination on people of color in many cities. And with the LAUSD police defunding movement, it allows students to speak up on the discrimination of children of color in LAUSD schools.

There are many different approaches to this issue and you can read more about this on the ACLU website and Los Angeles news sources like the LA Times.