College straight after high school is often the usual plan but the alternative to that plan is to take a gap year, which is taking a break from school for a year before continuing their education in college.

By America Diaz and Oscar Arreaga-Interiano 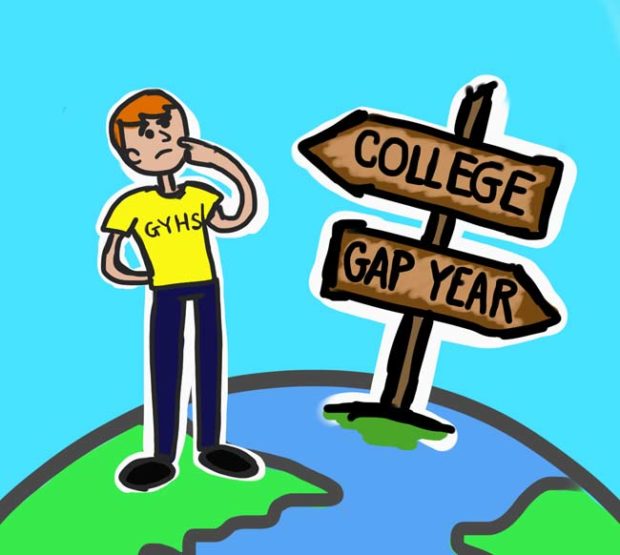 As seniors are approaching graduation in June 2022, despite the usual push to attend college straight after high school, some seniors are considering many alternatives including a gap year.

Taking a gap year is when a student chooses to take a year off for the first time throughout their entire academic career after graduation. This is an alternative to going straight to college after graduating high school to take the time to focus on themselves or take a break from school.

Despite possible benefits, a gap year is not a popular choice discussed in schools, especially when there’s college prep classes, studying for exams like AP or SAT, and applying for colleges by the start of senior year.

There are numerous reasons why someone would want to take a gap year, which can be for a needed break from academics, wanting to save up for college, working a job, needing time to figure out what to study, or a mix of many other reasons.

Despite the reasons, the idea of a gap year is seen distasteful to many. This is because there are numerous concerns surrounding gap years that tend to haunt students and parents alike.

The biggest concern, according to a blog called “My Life is Average” by Freya Brooks, is that student’s won’t go back to school after a gap year. Some reasons could be that people feel like students get too absorbed into their activities during their gap year and feel that it is unnecessary to further their education.

“I would say that taking a gap year will probably make you less likely to go to college based on the fact that someone might be working therefore making money and won’t have the opportunity to go to school, so I wouldn’t recommend them,” said Victor Guzman, a senior at Animo Pat Brown.

Some other activities can include internships, traveling, learning new skills, new family, and so on.

“When I take a gap year I plan to work, save money, get my driver’s license and take care of my mental health,” said Antonio Nevarez, a senior who will be taking a gap year after graduation.

Although this can be done when one is in college too, it shows how some would rather not stress about college work and finances.

This reveals that students are aware of the importance of mental health and many are their own advocates to ensure that they prioritize it.

Even though Antonio has stated that he feels like school can feel like a mental burden and very tiring, he still aspires to go to college after his gap year, more specifically community college.

When people hear about the concept of a gap year, most can argue that it’s not reasonable since they can get a degree and get their life together sooner,  why take a break?

According to Red Oak Recovery, a rehabilitation center that focuses on mental health, a survey they took revealed that many college students end up having mental health issues while in college, a statistic showing that 40% of college students have depression and 60% have constant anxiety.

Reasons for this, as stated in the article, are the change in lifestyle, being more independent, new learning environments and styles, and simply trying to adapt.

“Parents, especially parents of first generation students, often don’t understand the stress of school and the social life, instead they lecture me that if they were in my situation, they would go to college right after high school,” said Antonio, exemplifying how stigma is further created.

So the stress of future plans mixed with having to adapt to a new educational lifestyle leads many to suffer from mental health issues, feeling like they need a break.

Outside of the stigma surrounding taking a gap year in the U.S, it’s actually common in other countries for teens to take a gap year, primarily in Europe.

According to the Student Conservation Association (SCA), a non-profit program who works with youth to be conservationist leaders, a national alumni survey by the American Gap Association reveals that 92% of European students claim to experience personal growth and 85% experienced other cultures during their gap year, enriching their livelihood before college.

Large percentages, more than 90% of students, have also mentioned improvement in their communication skills and self-confidence, which one can argue to be essential to excel as a college student.

Due to it not being normalized in the U.S, it can be hard to discuss this decision to parents. SCA found through a UCLA study that only 3% of students in the U.S take a gap year.

“It was a while ago but when I told my parents about my decision, they got mad at me and kept lecturing me. Even now they try to constantly convince me to change my mind,” said Antonio.

Even if it’s hard to have one party see the point of view of the other, it ultimately depends on that student’s preference and to identify what they need and want.