The relationships between high school senior students and their parents are typically stressful and anxious during this time of period while making decisions where to go to college.

By Alvaro Moreno and Kelly Xhurape 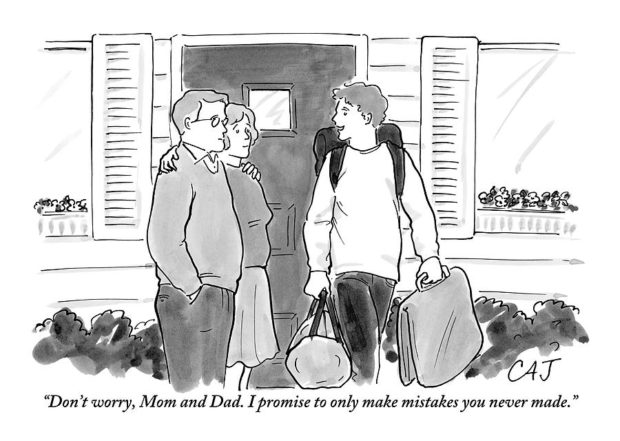 Students leaving off to college may be the toughest decision that a teenager has to face because it’s when they finally go out making their own decisions without their parents to guide them along the way. Image by Carolita Johnson FineArtAmerica.

Overthinking, deadlines and expectations to meet are what stress students, thinking about college and what they’ll do after is a major concern for them and their parents which they tend to put pressure and rush the process of high school to college.

Teenagers nowadays after the pandemic and quarantine have more mental health problems that don’t cooperate with this process. “The study reported that 37 percent of high schoolers experienced poor mental health during the pandemic and 44 percent said they felt persistently sad or hopeless the past year”  according to data from Health Line News.

Nowadays students don’t have the motivation or the strength to keep going, which a lot of parents don’t understand and think they are just being “lazy” or “doing bad”. Which can turn into having problems between students and their parents because they don’t understand each other.

“I have sometimes felt that I didn’t want to go to college but because of two reasons, my parents weren’t financially stable and I just didn’t feel mentally prepared for going off for college. But that’s what most of the parents don’t understand about seniors today,” said a former APB student.

But not all the time mental health is the issue but economic problems can make it worse. Parents always try to give the best to their children but sometimes it cannot be enough. “39% of high school parents said that they were affected by the pandemic and didn’t allow them to save up for their child’s education for college,” according to news in CNBC.

Parents struggle to understand this process of going off to college, whether it is financial or mental. Which is always an argument between parents and students if they don’t agree with each other. Relationships between them are not always the best to keep up and handle during stressful times, which is why students tend to leave their home, and become independent without the support of them.

“I feel students should care more about what is financially good for them and not for the experience towards going to college, later after college they would be able to enjoy it. In my opinion I wouldn’t have borrowed loans for her when she has many other options here because later on I’ll be stuck with the debt and not her,” said a mother from a former APB student.

Before a student graduates from High School it is likely that student will have to ask parents for certain information to apply to colleges. The student will probably have stress during this time applying for scholarships, getting certain documents, or choosing a major with these conversations. Parents will get to know their students while having conversations with them. Majority of the parents don’t understand the process of how financial, scholarships and college applications work after the pandemic and they tend to stress and worry about it.

Students base their college decision on whether they know if they can achieve a good job to maintain their family or if their true interest can be used to keep a stable job. And meet the expectations that their parents implanted them. Parents influence their teenagers to always “choose the best”, and if their interest doesn’t make enough money to become economically stable in a future it’s not “the best”.

“I felt I was going the right way in choosing my career, my mom had told me multiple times to give up on what I really wanted so I chose what was “convenient” and kinda liked, but to be honest I’m struggling right now,” said a former APB student.

After a student graduates from high school many have bad communication between their parents and themselves. One needs to keep in contact to have that communication.

Some ways to keep a stable relationship with your parents in college are by making phone calls home while keeping a positive attitude and listening to them carefully. This will help strengthen your bond with your parents.

Another way is by thanking your parents for supporting you through this educational journey of yours. Also be expressive with your parents let them know if something is bothering you or if you need help from them.