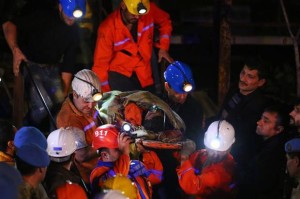 Things never get fixed until something really bad happens and the men working in the turkey mine on May 13 know exactly what I mean. The miners that were working in the mine in Soma, Turkey were not in a safe environment. According to Fox News, 2 days before the accident sensors had noted high levels of toxic gas. On May 13, the mine collapsed trapping many workers. According to Voice of America website the accident was caused by an electrical unit exploding and causing a fire. The mining company said that they were not sure of what had caused the explosion. Also, it is said that 787 workers were working on the mine while the mine collapsed.

Many family members were so devastated by what had occurred. According to news broadcast, many were waiting for their relatives to come out of the mine. Sadly, not every person survived as a matter of fact there was at least  274 dead according to Voice of America. According to CNN news, arrests were made, and 25 people were investigated. It is not clear if the four people who were arrested were let free or not. The four people that were arrested were the operating manager Akin Selik, engineer Yalcin Erdogan, engineer Ertan Ersoy, and security chief Yasin Kurnaz. The investigation is still going on and it is unclear what or who caused the accident. All the workers know was that the place was not safe to be working in and reporting the problems could have prevented all the deaths.