There is a 99.9 percent chance of a magnitude 5 or greater earthquake striking within three years between April 1 2015, and April 1, 2018 in the greater Los Angeles area, according to a study by NASA and university researchers.

Andrea Donnellan, a geophysicist at NASA’s Jet Propulsion Laboratory, said that  the research is not a hypothesis; That it’s a statistical probability that they calculated.

Because L.A. is expected to have an earthquake of great magnitude, the students attending L.A. schools are preparing for this earthquake. 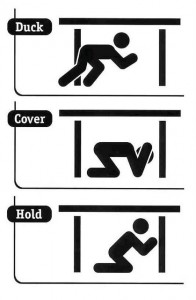 For example, students in Animo Pat Brown Charter High School are already  preparing for earthquakes. Recently at Animo Pat Brown, the whole school was involved in an earthquake drill including many other schools in L.A.. Every School teaches its students to “duck and cover” in case of an earthquake.

APB does these drills in order to prepare for a major earthquake.

“We are very prepared”,  said staff at APB,  Mr. Johnson, “due to the fact that we are trained for this.”

For APB drills, teachers order students to duck and cover. For the duck and cover, students have to get under the tables and  cover themselves. They do this to protect themselves from anything heavy or dangerous that can fall on them.

After this, students are instructed to go outside, line up on their classroom number, and wait for the teacher’s instructions. The teacher then takes attendance and makes sure everyone is safe.

Current staff in APB feels that the school is very well prepared in case of a major earthquake.

“Yes I think that we are very prepared. Due to the fact that we are trained for this, students are also prepared” said Mr. Johnson, a staff at APB.

Overall, he believes that APB is well prepared in case of a major earthquake. However, something Mr. Johnson believes APB should do differently in order to be more prepared is to have students remain quiet and listen for directions for earthquake drills and real earthquakes.

Most students at APB took the drill seriously, however, more students still need to work on taking these drills more seriously.

An anonymous student at APB believes that students did not take the drill seriously because it was just a drill and not the real earthquake.

Overall,  APB is well prepared not only for the expected earthquake that will occur within 3 years but also for many other possible earthquakes. The whole school has currently been involved in many drills in order to prepare for  major earthquakes.