Police brutality can be seen all over our nation, but here in L.A many accuse the officers abusing their authority. This is because some officers like the power they have over people and in some cases, some officers target a specific race. In addition, it has been witnessed not only in the US but also in other parts of the world.

The actions officers are taking in abusing their power, causes people to become outraged and begin to fight back. By citizens defending their rights, officers take advantage of their power and beat the citizen down and charge them with, assault on an officer. In other words, the innocent person is being charged while the guilty officer looks courageous to his department. In some cases, officers murder the innocent person and get away with no charges against them. Now instead of people having a good feeling when police are around, they fear them because they can be the next target of police brutality.

In order for these police beatings to stop, some departments issued cameras so police can protect their lives and so we can see the truth from what really happens. In addition, another solution “start firing corrupt police officers” says Senior Kathy Rocha. 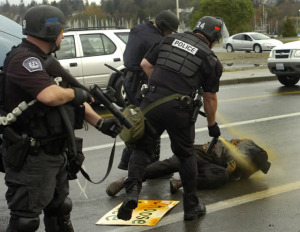