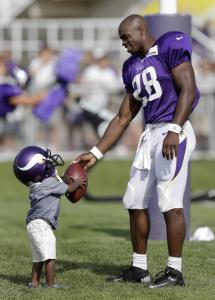 Adrian Peterson, running back of the Minnesota Vikings, is currently facing criminal charges for beating his 4 year old child with a wooden switch. Peterson is being indicted by a jury in Montgomery County, for what he found to be discipline and nothing more. As a child, Peterson faced many personal experiences of abuse. “I was hit, and I turned out to be fine. Kids are too soft these days!,” Peterson said. Peterson’s mother spoke on how her and her husband were big on discipline as their children were growing up. The Peterson parents would use belts, hands, switches, or any object within their reach to spank their six children. It has brought a variety of controversial opinions based on if hitting a child is okay.

Jose Ruiz, a student from APB says that ”hitting his child was okay because he came from a family in which they believed hitting their children is okay.” On the other hand,  Sam Ramirez, also a student from APB, and Hartford, principal of APB, said that ”he should be suspended, if found guilty because NFL players are role models for adults and children and it would be unfair to other players who have been in the same situation and got suspended.”