By Alan Gutierrez and Jesus Avina

Marlene Cazarez pulls up her hood as she approaches the end of the hallway and makes an abrupt left turn where she knows the security cameras can’t see her. She nods to a lookout to ensure the coast is clear of staff members, then heads to the dark figure who emerges from the shadows. Making eye contact, Marlene leans in to whisper, “The usual,” and slips them the cash. Upon expecting this, the dark figure pulls out a bag of Hot Cheetos and hands it to her. The deal is done, and everyone goes their own way.

Ever since the vending machines were removed from campus, students have been selling goods such as chips and candies to their peers throughout the day — Animo Pat Brown’s underground “Black Market.” These students ensure they are not seen or caught by any of the staff members while they are dealing.

Due to the majority of the staff and administrators not knowing about this distribution among the students, students take this opportunity to sell chips in order to make money. One anonymous vendor said that he makes $125 weekly, and about $25 in a day. This is due to the majority of students buying 1-2 dollars worth of chips or candies in one day. One anonymous buyer said, “I buy 3 dollars worth of chips and candy, but mostly candy.” 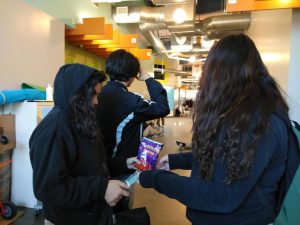 While there are multiple vendors at school, some vendors are more popular than others. According to anonymous witnesses, some vendors sell good quality snacks, while others sell candies that are 1-2 weeks old. Additionally, when popular vendors run out of goods to sell, students buy from other vendors leading to unhealthy competition between dealers. These vendors compete to see who can sell the most amount of goods, and who can make more money. One anonymous vendor stated that when he found out other vendors were caught by school staff, it was a chance for him to start selling snacks. They all have their own reason for vending at school. Some say they want to save money for college, presents, personal reasons, and just to have some extra money.

Principal Reed is frustrated with students selling on campus and has turned to tracking them down. Reed said, “It’s prohibited. It’s not allowed. No one is allowed to operate a business in school, if someone is selling something, they make themselves a target.” Mr.Reed is afraid of student sellers getting targeted by adults outside of school, or other students because of the vast amount of money they carry on them.

While some student dealers may recognize this danger, it won’t stop them from making easy money at school. This so called “Black Market” will continue as long as dealers benefit from making an abundance amount of money, and students continue to demand the need for snacks.