One year ago young Laura Barnes committed suicide shooting a bullet through her head due to an embarrassing video posted of her, during a party.When a group of teenagers Skype they receive a message from their dead friend and she seeks revenge. This movie is scary because it can imagined and it easily can cause paranoia while using Skype or social media. 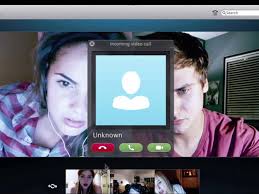 Like other suspenseful films this one succeeds in causing terror. Cyber bullying is just as harmful as bullying in person, the person who posted this video and caused her death is no white angel. Shaming her into committing suicide, which she committed on campus in front of all her bullies.

The unfriended trailer causes fear among all. The film better known as cybernatural has all Skype users puzzled. The cyber bullying in this movie shows to serve that making fun of people online is no laughing matter.

When asked if it she would watched the film ,11th grade Marlene Ruiz, she said, “I would be interested in watching unfriended because it’s a horror film.

“Plus it looks very interesting the plot and all” said Marlene “I would rate it an 8”. The film being “shocking and traumatic” shows how the internet can destroy anyone’s life.