Ted
When picking out a movie to review we immediately thought of Ted. When we first saw the trailer for the movie Ted we thought it would be a hilarious movie to watch. We chose Ted because since it is a comedy film, it would encourage people to want to read about it. We also thought that having your teddy bear come alive was very unique and adorable. The movie stars Bretton Manley as John Bennett, Zane Cowans as Ted, Mila Kunis as Lori Collins. Ted came out awhile ago on June 29, 2012.
The movie starts with John being an isolated child with nobody to play with. He didn’t get along with the kids from his neighborhood because they did not like him and they bullied him. On Christmas he receives a teddy bear and names him Ted; he tells Ted that they’re going to be best friends forever. When he was about to fall asleep a wishing star passes and John wishes that his teddy will come to life. The next day John wakes up to the surprise that his teddy bear was alive. As John grows up he creates a strong bond with his teddy bear. if Ted continues to be part of John’s life. At first John doesn’t agree but then gives in and Ted moves out of their apartment. Since Ted moved out he now has to work in order to pay for his own apartment. Since Ted and John do not see each other as often since they live separately, John hangs out with Ted behind Lori’s back. Eventually Lori finds out. Later on Lori breaks up with John because of a party Ted hosted and John left Lori to attend it. After this John gets mad at Ted blames him for the problems in his relationship. Suddenly a big tragedy occurs which makes Lori see that Ted plays a big part of John’s life. 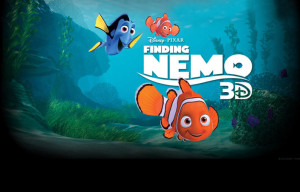 Finding Nemo 3D
Disney is bringing back the classic Finding Nemo movie once again. It first came out on May 30, 2003. That means that it is making a comeback after 9 years since it made its recent release in September 14, 2012. Except this time, it is out in 3D giving a new watching experience to viewers. The whole movie is about a clownish named Marvin who loses his wife and offspring because of a shark attack. Only one egg survives and that is Nemo. Marvin cherishes Nemo, and over protects him. Then one day when Nemo was in school, Marvin embarrasses him due to his over protectiveness. Nemo then decides to disobey his father and wanders off towards a boat and gets captured by scuba divers. The dad is devastated and attempts to find his son, he hears that the scuba divers are going to take his son to Sydney Harbor and goes after his son. during his journey he partners up with a fish named Dory because she knows the way to Sydney Harbor. There is a problem, Dory has short-term memory loss. Meanwhile, his son is on his own adventure being caught in a fish tank in a dental office where he meets new friends and together they come up with a plan to escape before they become the dentists’ niece new pet. Both Nemo and Marvin face difficulties during their journeys but eventually succeed.
Overall, this movie brings up childhood memories from the first time as a kid. The 3D effects allows viewers to interact more with the characters and get more into the movie. 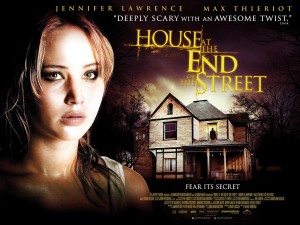 The House at the End of the Street
Since October is arrived, that means Halloween is around the corner. That means that new scary/horror films are being released this month. That’s why we decided to watch “The House at the End of the Street”. It’s a PG-13 movie that was suppose to be full of mysterious adventures and u inexpiable events that were suppose to be suspenseful and entertaining. Many people were suggesting that movie as a popular movie for the arrival of October.

The movie begins with a scary intro like something you would see in a Paranormal Activity movie. There is a girl who comes out of a room in the basement and murders her parents while they are asleep. That is about as scary as the movie gets. The rest of the film is about how Elissa (Jennifer Lawrence) moved to a new house with her mother Sarah (Elisabeth Sue). They bought a house in a little town next to a house with an old murder story. Neighbors say a girl named Carrie-Ann killed her parents and that she died a while later. But recently, the only people living there is Carrie- Ann ‘s brother Ryan (Max Thieriot). Throughout the movie Elissa becomes friends with Ryan but soon figure out the reason as to why all those murders where taking place thus explaining why the movie started out how it did.

After seeing this movie, we realized it really was not as scary as it seemed. The only really scary parts were the sound effects during the movie. There was very little action and you have to watch the movie until the end to fully understand what was going on or else you will be confused as to why certain things happened. Overall, this movie is not bad if you get scared fairly easily and are looking for a movie to watch during Halloween. 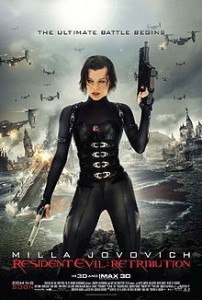 Resident Evil: Retribution
When we saw the trailer to Resident Evil: Retribution we knew we had to see it. We thought that it would be full of action and a great movie to see.Resident Evil: Retribution is a science fiction film. The cast includes Milla Jovovich as Alice, Rain Ocampo as Michelle Rodriguez, Michaela Dicker as The Red Queen and many more.This movie came out not so long ago, in September 14, 2012 so we thought that this was a good movie to review for our school newspaper.
The movie is basically about Alice, who worked for an underground laboratory called The Hive, trying to escape from the Red Queen who is trying to kill all Umbrella Corporation workers who were infected by the T- Virus. This virus causes the workers to die but they do not stay dead, they became uncontrollable zombies who attack human beings and turn them into zombies as well. Alice was captured by The Umbrella Corporation but the escapes with the help of Albert Wesker and Ada Wong. He disables the computer and supplies Alice with a suit and weapons so she could escape. He also manages to get a team inside The Hive and help Alice and Ada escape. As they try to escape they encounter many difficulties. While they are trying to escape Alice reunites with Becky who was her daughter before she was infected by the T- virus when Zombies attacked the town she lived in. Now Alice has to worry about the little girl as well. The Red Queen sends monsters to defeat them and make it impossible for them to escape, but they overcome these obstacles.

Overall this was a very interesting movie! It’s full of action ans suspense. We recommend this movie because you do not expect the events that happen next.