By: Santiago Vazquez and Robert Jimenez

Sniper Elite 4 is a third-person game that goes into first-person when the player aims down the sights of their gun. This game follows the story of a sniper by the name of Karl Fairburne. The game is set in Italy and the player must go through long missions to progress. Throughout the campaign, the player is allowed to play the game in the style that they want. The game also features a survival mode, co-op campaign, and multiplayer.

The game allows the player to run around the maps in third-person or whenever the player wants to gun down somebody with a submachine gun or pistol. However, the game has a smooth transition when the player aims down the scope of a sniper or look through their binoculars. The game also features a bullet and x-ray camera. The bullet camera shows the bullet going through the air until it finally pierces the enemy. Once the bullet approaches the enemy, the x-ray camera is activated to show the bullet penetrating through the enemy’s lungs, heart, eyes, testicles, and various other body parts. 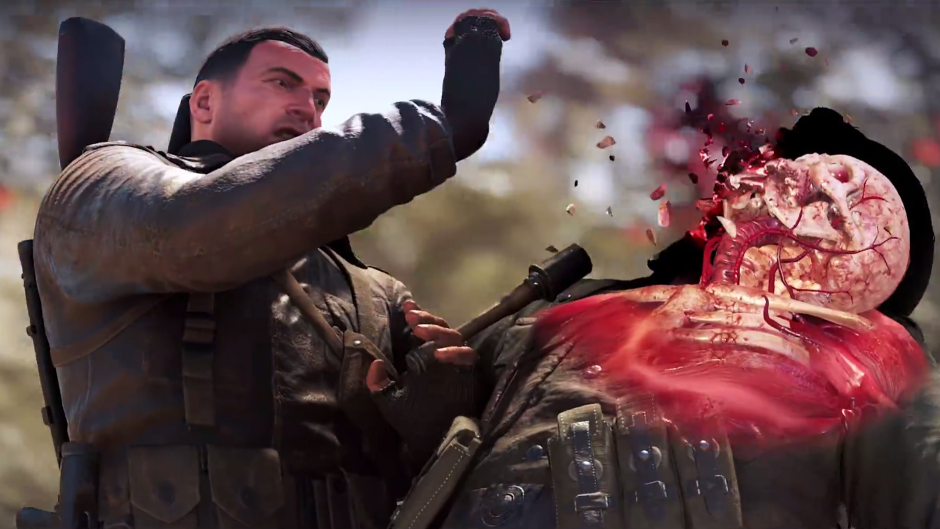 If the player wanted to they could play the game at the most difficult setting possible. This setting integrates real world issues with long range shooting, such as the wind’s speed and direction, gravity, scope adjustment, losing bullets if you reload early, and the scarcity of ammo. All of this makes every single shot important to pull off. Not only does it make the game even more difficult, but it also gives the player a sense of achievement every time they manage to pull off that long ranged shot. Another feature of this difficulty setting is what happens with the dead bodies. In other settings, enemies may find a body but they search the area slowly and give up easily. However in this setting, if an enemy spots a body, the enemies will immediately scour the area for the player, give up a lot harder, and will continue to remain alert while alerting others of the player’s presence. This adds yet another layer of difficulty onto the already hard game mode.

You play as Karl Fairburne as he travels through Italy trying to destroy Nazi war machines and other high priority targets. Throughout the campaign you travel to many places like a village by the docks, a forest with a railway, and an island village. The player must befriend a resistance by proving himself to them and must eventually kill Hitler. Each mission can be played in whatever style the player wants and take as long as they want. If they want to go through each mission guns blazing, the game will allow(just keep in mind that you may get overrun very easily if you aren’t prepared). The player can also play the game very patiently and sneaky. Each map have something that the player can use to mask their gunshots. Whether it be airplanes flying above or a rail gun going off every now and again. This allows the player to take their time and wait for noise to mask their shot. If that is not enough, the player can stalk enemies and kill them their knife or pistol (be warned, not all pistols are silenced).

The game also includes a multiplayer mode. You can play through the campaign, or story mode, missions along with the friend. This doesn’t change much of the game other than the fact that you’re playing alongside a friend. Splitting up while playing also makes for a lot of entertainment. Because of the noise shots from the players’ guns makes, enemies are drawn toward them. With this, you can basically ping pong enemies across the map until they’re all dead. You can also play against friends, and whoever gets the farthest kill wins.

This game also features a survival mode that can be played with up to 4 players. Enemies approach you in 12 waves, each harder than the last. This mode is a lot faster paced than the campaign and will leave you scrambling for a place to hold out until the next round starts. While you find a place to hide, you must keep in mind that you need to protect a supply station that gives you mines, grenades, ammunition and other useful items. If this supply station were to be overrunned by enemies, the supply station would be disabled for a couple of waves. This is a huge disadvantage because now the players will have to scavenge enemies for ammo. Furthermore, the game gives player only one life (there are no respawns in real life). The players will have to make decisions on whether to try an impossible rescue or make a sacrifice.

This game is incredibly fun to play (even if you don’t have any friends to play with). The game has a great campaign, co-op campaign, survival and multiplayer mode. The game is very realistic and gives you the satisfaction of seeing your enemies brains get blown out through an x-ray camera. The game also gives you the liberty to play the game the way you want. This game deserves a 9/10.