Dragon Ball FighterZ is a new Dragon Ball Z game that came into release in late January 26. The game was released by publisher Bandai Namco, the Japanese company responsible for creating the new game as long with other variations of other games and music, products and more. FighterZ is the newest game added to the Dragon Ball Z games franchise. The game consists of a three on three, 2D fighting stage while the characters are in a 3D game. The game has similarities to the iconic video game, Marvel vs. Capcom with it’s

The game revolves around the mysterious revival of Android 16 and a new enemy called Android 21, along with a super army of androids similar to the game characters both heroes and villains. The game takes place around the same time as Dragon Ball Super after the Universe 6 Arc and before the Future Trunks Arc. The game has a total of 24 playable charact 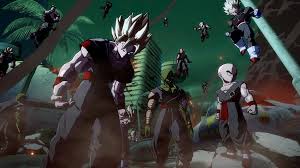 ers and more to come with DLC in the future. FighterZ was rated an 8.5 on IGN. FighterZ brings a new theme into the Dragon Ball Z games with a new style of game play than other previous games.

The game has been reviewed by GameSpot and received a 9 for it’s playstyle and the story within the game brings it to life. The games battle styles are extremely entertaining and full of action similar towards the battles in the anime.

Overall the game mechanics are said to be outstanding through the games play style. FighterZ is a most play for fans of the Dragon Ball Z community. FighterZ mixes numerous interactions with its characters. The interactions can be entertaining seeing how the game characters interact with each other. The game developers also include an option to choose between English and Japanese voice track with English subtitles. FighterZ is a highly remoned game to play if you like the street fighter style of the game and a entertaining story line in the game. So go out and try it!