As the second album in the Love Yourself series, BTS has certainly outdone itself with the 11 track album that explored the theme of heartbreak as opposed to the theme of a sort of puppy love in Love Yourself: Her, the first album of the series.

Sticking to tradition, the intro track is performed by one of the BTS members. This time it was maknae liner V’s turn to introduce the album with the R&B style song Singularity. V’s low, deep voice suits this style of song really well and the songwriter, BTS member RM, wrote the song with the singer in mind. The lyrics had a darker theme, as promised by the group, with the topic of the song seemingly about being in an abusive relationship as apparent through the translated lyrics: “…My voice was buried for you..”, “Did I lose myself or did I gain you?”, and “Tell me if my voice is fake…” It’s a very powerful song that introduces the album very well.

The title track, Fake Love, was performed at the BBMAs in Las Vegas on Sunday May 20th, 2018 (and filmed very poorly) and performed in Korea with an Mnet stage (with better filming) the following Thursday. The song, performed by all seven members, is about realizing that the love in a relationship was fake and being tired of trying to keep it together after all their efforts. The song begins with the ‘95 line (Jimin and V) harmonizing as an intro to a song full of beautiful verses by the vocal line (Jin, Jimin, V, and Jungkook) and powerful verses by the rap line (Suga, J-Hope, and RM). Jin, a member who was once given mere seconds worth of lines or only provided background vocals, has a minute of lines and has been brought in as a main vocalist (where he belongs). This song seems to follow the anger stage of a heartbreak and is a real bop with a catchy chorus. 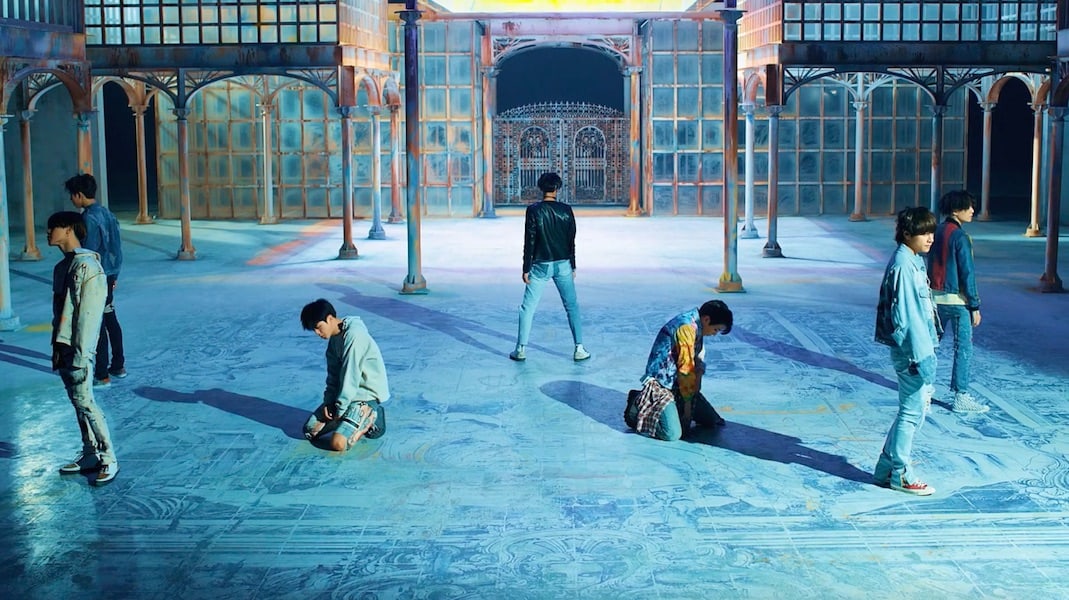 The third track on the album was co produced with DJ Steve Aoki, who they collaborated with before for their song Mic Drop from Love Yourself: Her. The Truth Untold is a vocal line song and is not what you’d expect from an Aoki song as it is soft, slow, and absolutely heartbreaking. The song is about the emotional relapse that comes from a heartbreak, which the lyrics sum up perfectly in the chorus with “But I still want you”. The raw emotion in this song is enough to make anyone cry.

134340’s title came from RM’s love of astronomy as its the the coordinates for Pluto: the furthest planet from the sun that isn’t even considered a planet anymore. The message of the song is about feeling isolated and outcasted after a breakup, despite the upbeat rhythm all 7 members rap and sing to. It’s riddled with references about astronomy, courtesy of its composer RM.

About half way in the album, Paradise comes in with a more relaxed beat with lyrics that reflect a more carefree mood. It’s about not pressuring yourself to live up to impossible expectations and learning to just “Stop running for nothing.”

6th in an 11 track album, Love Maze is a song that you can’t help but jam out to. Jin is given more lines once again and is given the iconic line in the song “Just don’t give a damn” in his harmonization with Jimin. The bop is about the complication that is love, comparing it to a maze, but also about how it’s not a bad thing when traveling through it with someone you love through all the ups and downs.

Magic Shop is a song to ARMY, the group’s fandom, and was written and produced by Jungkook and RM. The song is supposed to reflect the love that the group has for their fans and thanks them for being with them on their journey and how they want to return the favor. The song is very heartfelt and once again has references about astronomy but also holds the very sweet line of “You give me the best of me, so you give you the best of you.” It’s enough to make any fan nostalgic and emotional.

Airplane pt 2 is a continuation from the song Airplane from rap liner J-Hope’s mixtape: Hope World. The song’s beat and rhythm is inspired by latin american music (bachata and tango) and is a nod to J-Hope’s title as the “Prince of South America”. The song includes all 7 members of BTS and is about their insecurities as idols and their pride at their progress. There is an amazing duet between rapper RM and vocalist Jin, an inclusion of the original rap from Airplane, and references to different cities the group has toured in and will tour in. It’s hard not to want to dance to this song.

Anpanman, the 9th song, is also a song to ARMY and is reminiscent of 90s hip hop/pop. Anpanman is a Japanese comic book superhero who is essentially useless but means well. BTS use this hero to represent themselves and compare themselves to Superman, saying that even though they aren’t perfect like the famed superhero, they hope to be ARMY’s hero. The song is very upbeat and happy, just like its lyrics.

The 10th song in their album is called So What and it holds a similar message to Paradise about just learning to live in the moment and not caring about what others think of you, just like the title suggests. The song is also about being able to enjoy being young and taking advantage of it.

The 11th and final track of Love Yourself: Tear is the outro with the same name- Outro:Tear. The song samples a piano track from one of their short films that came out before the Love Yourself series began. As following tradition, the outro consists of the rap line. It explores both meanings of the word Tear- crying and to rip something- as well as the theme of fear, each rapper taking one aspect of the themes explored. The song is written and produced by all three rappers and holds raw emotion behind their voices. It’s the perfect close to this album, tying everything together.

In short, BTS has outdone themselves once again, handling the themes presented in the song professionally and artistically. Their vocals and lyrics have improved since their debut in 2013 and they continue to grow and inspire. The series isn’t finished just yet, but be sure that they’ll put out another masterpiece just like this album was.