Animation has been around since 1603 and has been improving over the centuries. One of the highly well known animated characters that everyone is aware of is Mickey Mouse. The friendly mouse that loves, helps, and plays with his group of friends. A character that Walt Disney would portray as the main icon of Disney for many years to come. 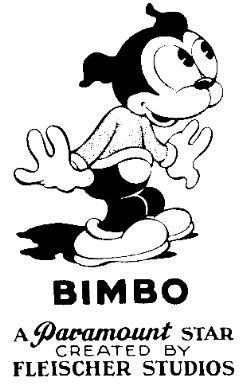 Though, there is one animated character who was left behind. Abandoned and forever forgotten from the memories of those who once loved him. This specific character is Bimbo. Bimbo is a male character and his species is a dog. Strangely enough, he was also the main love interest of Betty Boop in her cartoon series. Until, he was taken off Betty Boop’s series due to the fact that Betty creators made her appear more human. The creator also realized that the love interest between a human and a dog was starting to become weird and disturbing.

For many people who are not fully aware of who Bimbo is, he is known to be the very first character to have his own animated dialogue. This is seen in Bimbo’s appearance in the short film, “My Old Kentucky Home” made in 1926 with Bimbo saying, “Follow the ball and join in, everybody!” Plus, the films that included Bimbo were not exactly what you would call ‘child friendly.’

The creators who rightfully own Bimbo is the Fleischer Studios. The founders of the studio were two brothers, Max and Dave Fleischer. As they continue to do their own short films for Bimbo there was someone else slowly planning to ‘borrow’ their own creation. This person was Walt Disney himself.

As the Fleischer brothers gained money and fame for their creation, Walt wanted to earn and gain the same treatment, so he took it upon himself to create an icon that would have the characteristics of Bimbo, but look completely different all in its own.

Thus, Mickey Mouse was born. Walt wanted his entire film of Mickey Mouse to be ‘child friendly’ unlike the more ‘adult version’ that the Fleischer’s were doing with Bimbo. This decision resulted in Walt gaining more attention from children and families. The goal of fame and recognition was finally given to Walt Disney and he begin to expand his own empire.

In Bimbo’s short film called Bimbo’s Initiation,  Bimbo is seen taking a walk in the streets and whistling as if the day was any regular day. After stepping on three manholes on the street, Bimbo is ready to step on the fourth manhole then the audience realizes that someone took out the manhole cover that connects to the sewers. Bimbo without realizing this falls straight down and on the left side of the screen you see a big lock.

A mystery character locks the manhole cover that Bimbo has fallen through and begins to laugh. When the audience finally gets to see this mysterious character it turns out to be Mickey Mouse. As Bimbo is down the sewers being physically tortured by a cult, Mickey Mouse was being a very big jerk and left Bimbo behind. What happened to the lovable and the always-liked-to-help-his-friends mouse?

Though this film was created by the Fleischer’s Studio. This film was made to express the very big rivalry between the two companies and the reasons behind Walt Disney’s actions. Sadly, Bimbo lost all the hard work of joy and laughter. In the end, Bimbo was left to the dust and thrown away as the forgotten Bimbo.