Many people have most likely already seen the atrocity that 2019 Sonic was, in his movie trailer. The disturbing physical look of Sonic is very painful to watch and it’s very sad to see how much damage is being done towards this character. 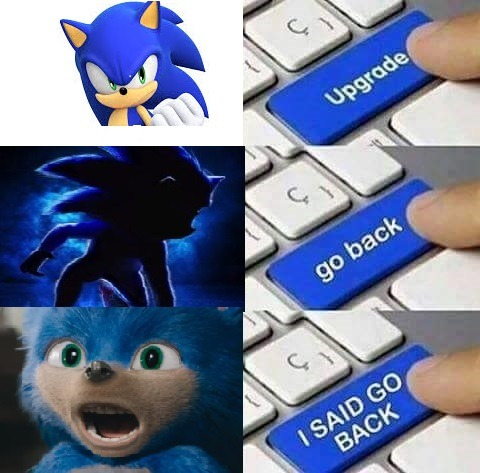 After years of Sega not doing their jobs properly when it came to the video games of Sonic, they all decided that it would be a GREAT idea to screw up everything by making a movie of Sonic. This caused the creators to dig a more deeper hole towards Sonic, even though he was already in one.

Many people in the media are not pleased with the visual appearance of this grinch-wanna-be character. His human like hands, and humanoid body just gives most people a sense of unnecessary disgust. Although, there are very few people that actually are happy with the design and do not find it terrifying in the slightest.

Those who really oppose the design change criticizes over the whole look towards the designers. The director of “Sonic the Hedgehog” had responded to these criticism by saying, “The message is loud and clear…you aren’t happy with the design and you want changes. It’s going to happen. Everyone at Paramount and Sega are fully committed to making this character the BEST he can be.” This brings a sense of relief towards the Sonic fan community, but that leaves us with one issue.

The Sonic movie is set to be release in November 8, 2019. Will Paramount and Sega be able to revert the design of Sonic before the time is up? Or will they need to extend the release in a different date.

Another thing the media is talking about is how the movie “Detective Pikachu” was a success, while “Sonic the Hedgehog” will be a failure. The unnecessary change in design was a step backwards, and it would have been much better to go with a simpler approach. Give more details on why it would be a failure Sonic has been character that deserves to be love, but with the way the Paramount and Sega got his whole physical looks wrong demonstrates that they do not care for the character.