A list of games and game genres collected for use of popularity to determine the most popular genres for people to pick up and play.

By Oscar Arreaga and Christian Arellano 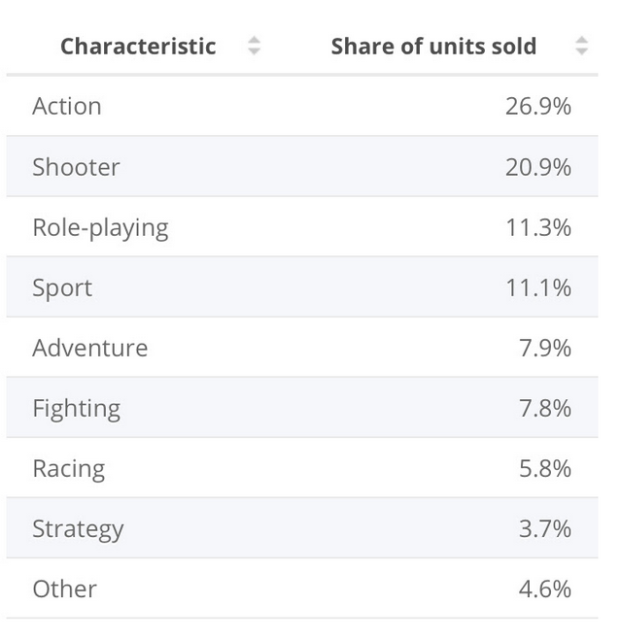 While summer was in full swing, video games rose in popularity along with the amount of genres games there are as well.

Games have a huge popularity. However there are several different genres such as adventure, RPG, shooter, or action. Each is ranked here based on statista and Twitch showings.

A senior, Joanna Moreno, “There are many games that are very good, with good animation or good story telling, but also their genres like sci-fi or medieval. For action shooters there is an easier game for people.”

Action games tend to be games with a focus on their namesake, action. These games tend to have lots of segments focused on reaction time and hand-eye coordination. Strategy games however test your mind or your mentality to solve puzzles or make plans.

With another piece of information, shows the change of popular game genres over just 2 days in the month of August. According to Twitch’s viewer ranking, Grand Theft Auto V , an adventure game, sits at the top of the charts with 386K viewers. Minecraft , a simulation game,  is in second place with 367K viewers. Apex Legends , an FPS and shooter game, is in third place with 170K viewers. League Legends, a MOBA and action game, isat 4th with 168k viewers, and Counter-Strike, an FPS and shooter game, is in 5th with 152k viewers.

Senior, Alexis Moreno says, “League of Legends is one of the biggest mobile games made and accessible and minecraft ever since it came out, while GTA or grand theft auto has still been relevant, while the rest are all action and have a lot of shooting”.

The most viewed genre of games or popular games fall under the category of action, FPS, or shooter.

The least viewed genre of games or popular games fall under the category of a multiplayer online battle arena that involves team vs team action or known as MOBA.

Senior, Brayan Alonso says ,” I believe that these games are the most popular because of how open world they are. They are almost limitless in possibilities (with the exceptions of the shooter games)”.

The most viewed or seen in the rankings can be related to first person shooter (FPS), shooter, action, and even MOBA had decent but better than last time.

The least viewed genre would be adventure and simulation despite being at the top from the rankings shown on twitch during day 1 and 2.

The most viewed genres, combining both twitch and statista, are action and shooter games. Games of the genre  can be Call of Duty, Apex Legends, and Counter-Strike.

The least viewed genres by using twitch and statista are strategy, MOBA, and adventure. Games related to these genres are Legend of Zelda, League of Legends, and Assassins Creed.

And in all, if you are looking to get into games during the summer, choosing the most popular ones may help in getting a game that you can likely enjoy with friends.