Snoop Dogg Tweets a homophobic slur on social media then deletes it.

according to buzzfeed.com it was about 12:30 am eastern time when snoop dogg posted the following image on his instagram account of two men in bed.  With a homophobic slur “u n ya boyfriend since u like jumpn on my page disrespectn bitch boy go suck ya man n get off my line f.A.G.” 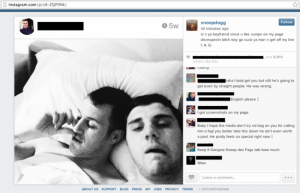 there’s no word yet on why snoop dogg decided to post this slur on social media but by the looks of it It might have a  huge impact on his career. Do you believe snoop dogg will be hurt by this incident ? if so let us know in the comments