Last week Univision host, Rodner Figueroa,  for television show “El Gordo y La Flaca” was fired for a disrespectful comment towards first lady of the United States Michelle Obama. He compared the first lady’s appearance to one of the apes from “ Planet  of the Apes”. During a live broadcast of “El Gordo y La Flaca”, Rodner was commenting about make-up artist Paolo Ballesteros transforming himself into women who are celebrities. Michelle 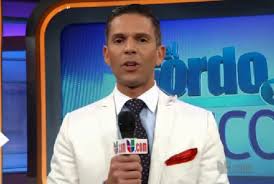 was one of the women Ballesteros transformed himself into Rodner, observed the transformation with one of the First Lady’s pictures. “Mind you, you know that Michelle Obama looks like she’s part of the cast of ‘Planet of the Apes,’ the film,” Figueroa said. Host Raul De Molina countered Rodner’s comment saying that Michelle was very attractive. The show aired for the entire East Coast but, was edited for the West Coast. Actress, Raven Symone Mostly known  for the show “That’s so Raven”, came out in His defense on the show “The View” this Monday. “Michelle, don’t fire me from this right now, but some people look like animals. Is that rude? I look like a bird! So can I be mad if somebody calls me Toucan Sam?” Symone said. A 12th grader from APB was asked If they thought Rodner’s comment was racist they claimed that “ his comment was very offensive and racist he got what he deserved”. Later on Univision confirmed the Dismissal of also “Sal y Pimienta” Host Rodner Figueroa.