The Broadway Crips wanted revenge for the death of Murray. In doing so, their aim was to kill 100 people; other gangs heard of this “contest” and decided to join in. Over time, there have been many posts on social media with the hashtag #100days100nights. Police Officials have taken the hashtag, #100days100nights, very seriously after a woman with her two kids were shot at and wounded.

According to Daymond Johnson, a Campus Security Officer at ÁPB, the reason behind the whole event of 100 days 100 nights was because of the killing of a Broadway Crip by the name of K.P Murray. The Broadway Crips, took the killing of their fellow gang member into a context of retaliation. The crips wanted to retaliate by killing 100 people. Although, that thankfully hasn’t happened yet but the number of killings is climbing. So far there have been 72 killings. Although information hasn’t been clarified whether if the killings are solely from the Broadway Crips or from various other gangs that are involved in 100 days 100 nights. Moving on to the matter of whether if the range of the killings will spread to our school, it is very unlikely. These gang based killings are happening past the 110 freeway. As seen in the map below. 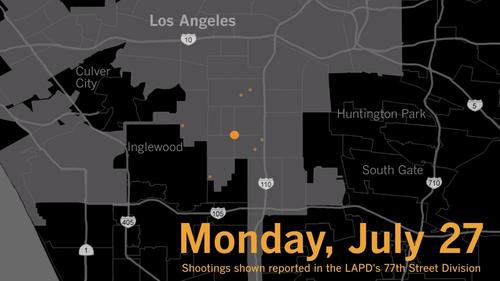 The 100 days 100 nights affects APB students that live nearby the affected area. This can concern most APB students because they either know people who are locals of the area or are fearing for their own lives.

Karla Raygoza, a current junior student at APB said “This concerns me because I have friends that are local to the areas where this is taking place. It worries me that something horrible could happen to them and their families, god forbid.” It affects her because she feels her friends are in an unsafe community. Around her area not much violence happens so she feels it’s safe and is less concerned about it, seeing that it’s calm. When asked if she knew anyone affected by this in any way she said “My cousin is a local to the 100s area and got shot due to corruption by gangs”.

Adam Bautista, a senior at Ánimo Pat Brown is very concerned for his family and advises people not to hang around in dangerous areas. Adam lives around the areas of Central and Century and statistically, it is one of the main areas that is being affected by this “blood game”. Adam wouldn’t want his family getting affected by this blood bath that is occurring around in South Central Los Angeles. “I am very aware of all the shootings and violence going around in the area of where I live” said Adam “I am also concerned for everyone’s safety”.