Abortion: The deliberate termination of a human pregnancy most often preformed during the first 28 weeks of pregnancy 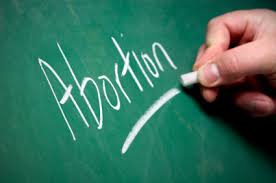 A bill passed in California by legislatures in October 9,2013  which allows nurse practitioners, physician assistance, and certified nurse midwifes to preform abortion procedures in the first 12 weeks and will loosen building standards for abortion clinics.

WHAT STUDENTS AT APB THINK:

We asked students the following questions:

11th grader Caren Flores told us: “That I  personally would not get an abortion, I would keep the baby and raise him/her because that baby would be a part of me. I would be killing my own baby.”

10th grader Bryant Gutierrez said: ” No they shouldn’t because they are still young and can eventually regret it later on.”

9th grader Adelena Flores stated: ” No because under age girls may have a high risk then regular pregnant women.”

9th grader Ivan A. Isidoro told us: “Yes because the women might have personal problems so they can’t deal with the stress of having a child in their lives at the moment.”

I myself an Nancy Ramirez believe that abortion should be legal because the women should have the right to decide whether to keep the baby or not because her life is gonna change when she has her baby. One never know the situations in which the women may be going threw. For instance if she was victim of rape and thinks she won’t be able to love her child so she should have the option to abort instead of abandoning her child in a foster home. If abortion were to not be an option foster homes would become filled and the child might not be adopted and may not have the opportunity  to grow up with parents.