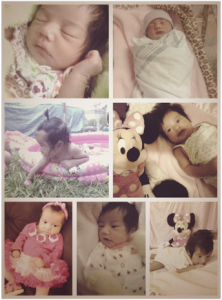 My life as a teen mom was very difficult at first, I didn’t know how I was going to face my parents and tell them that i was pregnant , I was afraid of what would they tell me or do. However I knew that I had to speak up sooner or later . So I did after telling them the news of me being pregnant all I see is my mom breaking up in tears my dad with that mad face. All I said was “I’m sorry I never meant to let you guys down like that”. After all those bad moments I put my parents through. Before going into labor the doctor told me there might be a risk that my princess wouldn’t make it through as soon as the doctor told me that I broke down into tears and I started praying for my babygirl to make it through. Finally ,the time had came Emma Gabriela Orozco came to this world , March 14 , 2013 at 6:24 am. She was the most amazing beautiful baby I have ever seen , she had me smiling and crying of happiness when the doctor gave me my daughter to hold her i said, ” hey princess I been waiting so long for you to be here and finally I have you , I love you mamash “. Morning after waking up to her cute little giggles of hers brings me nothing but happiness, her gorgeous big brown eyes are the cutest. To me my daughter is the most BEAUTIFUL person ever. Shes growing up too fast , not so long ago she gave her first step. Every time she hears music playing she stands up on her own and start dancing, shes going to be a little feisty little girl.

Even though there are times when I feel like giving up on school because I found it hard being able to study or do homework for a certain class and having to be there looking after my daughter is very hard,but I always push myself not to give up so I can be able to provide for the well-being of my daughter. I want to be a good example to my daughter for her to look up to me that even with a baby at a young age I was able to be successful. Overall, my daughter is my only priority now , shes the one that gives me the strength to keep on going in life. Emma Gabriela Orozco means more than the world  to me  I love her so much 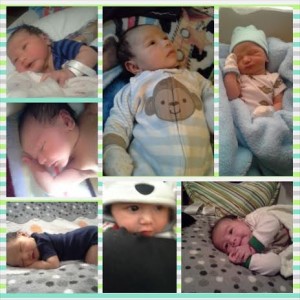 Before confirming that I was pregnant, I already had a feeling that I was pregnant. I mean I hadn’t gotten my period for like two months. So I wasn’t all that surprised. When I told my parents that I was pregnant I was already five months, so they were pretty stunned by the news. My dad just told me that they would help me with everything that they can, but my mom non stopped cried. I felt really bad, I had disappointed my parents, and they had told me various times to be careful and use protection. I failed…

Well I started my prenatal care and I was able to see my son through the ultrasound, the doctor couldn’t tell me what sex my baby was yet and I couldn’t wait to find out.At school there was already rumors about me being pregnant even before I actually knew. So it wasn’t a huge surprise when I finally told my friends I was. I kept going to school until the a week before I was due, on Saturday we had an SAT, I took the test with pains, I was in labor..  I gave birth on Sunday 10: 58 a.m.

Going to school while pregnant, for me wasn’t that hard. I never got “morning sickness” or any other pregnancy symptoms.  So I just tried to focus the most I could on my work. That I know of no one really talked bad about  me, that I know of.Being a teen mom isn’t super hard as I thought it would be. My son doesn’t really cry a lot and if he does it’s only because he wants to eat, he’s a fatass like his dad.

I don’t think that he ruined my life, on the other hand he bettered my life, he gave his father and I a new meaning about love and life. I wouldn’t take anything back, because I love my son and now I can’t imagine being without him.