In the town of Ferguson, Missouri there has been a violent brawl between angry protesters and police officials. Blood has spilled and the people involved in the violent protest are enraged. Police are fed up with this predicament, they have performed these acts of violence against protestants which has infuriated the police officers more. The police involved have shown no remorse whatsoever. Protesters are also going overboard with these protests. In the picture to the right you will see protesters burning the United States flag. They have lost faith in this country. 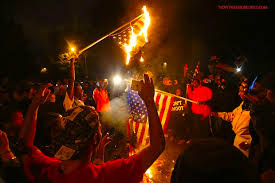 Those young men did not deserve to die, but the United States does not deserve to be disrespected this way. The deaths of these young men have left many people hopeless to make justice because the police who committed this “crime” have not had any consequences. These deleterious riots have consumed  all of the town of Ferguson and created many peoples daily lives into a living purgatory. These riots are too violent and are not contributing in positive manner to what protesters want.The policemen have all the right to use force against protester. The protesters need to understand that what they are doing is wrong and is hurtful to many aspects of society like economy, citizen life and lives of innocent business owners. The riots occurring are also ridiculous, to destroy their own community businesses will not bring them any justice. This rioting will  only bring along an economic crisis and a high unemployment rate which can hurt this country which has tried it’s best to benefit all of it’s inhabitants. Peaceful protests can be used to bring upon justice for these events. Residents can peacefully demand for justice instead of hurting themselves and their town. For example they can petition, Sit in, or even a bed. The U.S’s main concern should be the well being of its citizens and it does not seem like it is, if it was concerned over its citizens  the city of Ferguson would not be in this situation in the first place. In today’s modern day it seems many have forgotten what it means to be civilized (including government officials). Residents of Ferguson do not realize the power they have over the states decisions. Anger has blinded protesters and created the violence they now use to try and make judicials reconsider their decisions. The United States should remind citizens that they are only hurting themselves even more.

The whole Ferguson protest is getting out of hand and there has been a lot of riots which is causing a lot of damage and violence. I know that they want to be heard and that they want justice from the law, but all what they’re causing is more strictness from the law to the community. Which will make the community  worse. They can’t just ask for demands and think that the grand jury will accomplish all of the demands. All that can takes time and it can’t accomplish from a day to the next. Also you can’t be starting or participating in  riots. You can’t break in stores, what benefits you  from destroying your own community with childish actions. Throwing a huge tantrum like a baby won’t solve a thing. What’s the point? To ask what people, they want to make a big justice change. On the other hand, being aggressive towards the law enforcement won’t stop all this madness and it will evolve to a worse case.

Now students are walking out of class for the Ferguson protest. Instead of learning to get an education they get involved in the protest that does not involve them. “Hundreds of students from four Denver schools walked out of classes on Thursday, marking the second straight day of marches in support of protesters in Ferguson, Mo.” (http://www.denverpost.com/news/ci_27066882/hundreds-walk-out-denvers-lincoln-high-ferguson-protest) . I know they’re trying to make a difference, but that does not help if they are acting like savages! The problem is only getting  worse.

I understand that all they want is equality and justice for the citizens, but being killed by police officers is not getting there. People should  try to solve it as a civil community.  The whole protest is just making things worse, all they’re doing is causing damage to others. While some people want to protest in the middle of the street, others go to go to work and have a family to feed. So while you people are protesting, you’re making it hard for others to support you. They need to work and get to their kids instead of being in traffic because of all the protesters. So as a civil citizen just solve it the correct way instead of acting like savages. You’re just risking your life and the life of others.

Opinion
One comment to “Ferguson: against the violent protests”