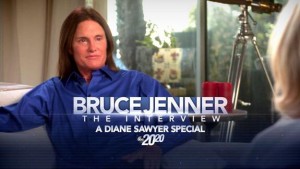 Recently, Bruce Jenner openly admitted that he would soon transition into a woman in Chapter  13 of Keeping Up With The Kardashians. Although he made his decision public he did not discuss the matter or gave any specific reasons. Now that his transition is more advanced he did a nightline interview with Diane Sawyer where he gives the reasons that took him to make this decision and the difficult process of accepting who he is . He begins by saying this was a hard decision because he didn’t want to disappoint people , but he also couldn’t go on living a lie . All his life he had been confused , “The gender of his body is different  from the gender he feels in his soul” (Diane sawyer ); this is something common, not necessarily because you are born a certain gender that means you have to deprive the gender that is deep inside.  People’s initial reaction tends to be “Omg Is he gay?” but he clearly states that he is not gay.  Many people get confused by the question people have, “What is the reason for his transition if he ultimately still likes women? This is where people get puzzled with sexuality and gender, sexuality  is a person’s sexual orientation or preference and gender is the identity a person is born with, as well as an individual’s consideration of what he or she considers to be. When someone is confused about their gender people immediately think about sexuality; is he gay ? is she lesbian? although,  sexuality and gender can be tricky they are different things, people often misinterpret their definition. They often judge those who are confused about their gender.

Bruce Jenner feels confident that he is doing the right thing, and it’s best when you can express who you truly are regardless of what society might say. Recently, many have been divulging  that he is doing this for publicity, a simple stunt to promote the show “Keeping up with the Kardashians”. The response that  Bruce’s gives is “We’re doing this for publicity , yeah right, do you have any idea of what I’ve been going through all my life… what I’m doing is going to do some good”. It is evident that Bruce isn’t stressing about the comments that people might have, about the choice he has made. Furthermore, he strongly believes that this will do some good for people who go through the same thing, Bruce wants to share that his story is one in a million, many people will rather live with secrets all their lives instead focusing on what they truly desire, not on what others want. Perhaps this will give the courage to those who are still afraid of revealing who they truly are, this will provide many with motivation to be themselves even if others might not agree with the choices you make. Bruce Jenner, his fame, and his courage, will eventually influence those who feel that it’s time to live life without regrets without hiding one’s true identity. There is no doubt that he is indeed a motivational speaker to many, not only his actions has grabbed people’s attention but his powerful words. The impact that Bruce Jenner will cause on the Transgender is a way for people to stop being afraid, especially due to all the harmful words, violence that exists towards them.