By Kayla Michel and Kayla Gonzalez

Earning a college degree today is the definition of “real success”. The reason people go to college is to earn more opportunities, as opposed to in the past where high school graduates today are unable to obtain the number of high paying jobs that were once available. Today, earning a college degree is crucial, however minorities are getting the short end of the stick, whereas they are less likely to earn a degree as opposed to whites or Asians. 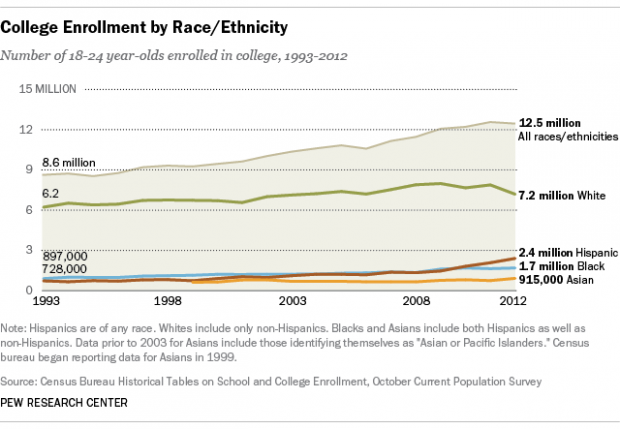 It’s obvious to think that whites are actually more likely to go to college and graduate in 4 or 6 years as opposed to other minority groups. Majorities are labeled as people who have privilege and are handed things to them on a silver platter. However, the racial gap is slowly narrowing down in college enrollment, but there is no change in college graduation rates-which is very interesting.

It is hard to see why minorities are not graduating. Studies show that whites are more likely to graduate and have a bachelor’s degree than a black or Hispanic student. Merely, it is not about race, but socioeconomic status. Students from a high-income family are more likely to go to college and graduate than a student from a low-income family. The reason being, low-income parents tend to sacrifice things to satisfy their kids and make them happy. This also applies to education; families cannot afford a better education and put their kids in a private school, so they rather save that money to afford other things and put their child in a public school. This results in students not fulfilling their educational needs and criteria for them to apply to any competitive colleges.

Another problem that can arise is that the family cannot afford their child’s college tuition.  It might be expensive for the family, and they have to take the alternate route and have family members start working. It is a troubling situation for families to cope with and watch their son or daughter not succeed.

Coming from a lower class family might be concerning because people do get deprived of certain privileges. The reason why majorities attend college is because they can actually afford to pay for the tuition. Being part of a minority group is distressing, because they do not receive the equal amount of attention as whites, therefore, at times they cannot pay for college and results them in not attending college. This causes future generations to suffer the consequences as well because they are unable support due to the lack of a higher education.