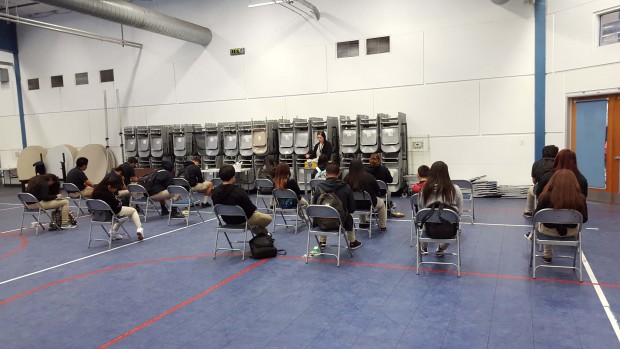 At the start of the school year students were informed that if they came late they would be serving 30 minutes instead of the usual minutes of lunch give back 15.

While staff has noticed the difference in students time arriving to school, many students have negative opinions towards this.

Many students are not satisfied with this time change. They have begun to complain and calling this unfair. Students are late for many reasons, some that are even uncontrollable.Such as, getting stuck in traffic.

Students also suggest that if they have to give their time, teachers should also give them their time when they come late to class. Sometimes teachers take minutes to come to school because they also get stuck on traffic. However, they don’t make up their time to students.

Many staff members and teachers don’t understand that students have issues before coming to school too. They only care if they are here on time regardless of their excuses.

If students are one minute late, they still get lunch  give back and the same amount of time as other students who were late by 10 minutes or even an hour.

Once someone is late their excuses seem irrelevant, as they are associated with being lazy. It is assumed that students are wasting time in the morning by not setting their alarms at the correct time.

12th grade teacher, Ms. Bruski, finds lunch give back to be a fair punishment to being late. She said that many of the excuses students make to being late can’t be justified.

“If they have traffic on their way to school they should set their alarms earlier” she said. She continued saying that “In a job you will be penalized for being late, so we are preparing you for that”.

He understands that many do not like this policy, but it prevents many of them from being late. He believes that students should serve 30 minutes no matter what and that there is no exception to being late.

An anonymous sophomore, expressed his opinions on the recent change of 15 minutes to 30 regarding lunch give back.

“Lunch give back isn’t fair. I remember I was about to step into my class when the bell rang and had my teacher close the door in my face. I wasted more time going to get a tardy slip than how long I would’ve actually been late.” He found it outrageous  how many students were in lunch give back because of a minute or two.

He continues to argue that it doesn’t really make a change in everyone’s day to day routine if they choose to be late they’ll continue to do it. He refutes Bruski’s argument by saying that with many students coming from different distances their short tardiness should not be held against them.

“You can wake up earlier, but it doesn’t change the time the bus normally arrives which can be every 15-30 minutes. Which can be extended by traffic. Most of the time the bus that they have to wait for will drop them off barely on time or a few minutes late which should not be held against them.”

Lunch give back is helpful because it prevents some students from being late. Students run to class, so that they won’t be late since there are consequences. Lunch give back reduces the amount of tardies. However, it is unfair because some students shouldn’t have to serve practically their whole lunch for being a little late. We find it to be unfair for a few minutes to be held against you.