The game revolves around the main character called Ethan Winters. Ethan receives an email from his wife, who has been missing for 3 years, to go find her in Louisiana. All seems fine when you arrive at the place until you see a gate made out of dead cow legs. Eventually, you fight your wife Mia and “kill” her only for her to come back and lets just say, when she comes back, you’re going to need more than a hand(something happens to your hand). You are then introduced to the Baker’s family where the true horror begins.

The main character is Ethan Winters who has no prior training in the use of weapons. This is good for immersion because it makes you feel as if Ethan Winters is an average person who is just looking for his wife. You spend the whole game running around in first-person trying to conserve the ammo you are given for when you truly need it. You have two ways to play the game: shoot everything that moves (and if it doesn’t move, shoot it anyway) or you can play the game avoiding enemies and only using your ammo in boss fights. There are also two section of the game, the first takes place in the Baker’s residence and the second on a boat.

The Baker family are the main bosses while a new enemy type called the “Molded” are more like the shambling zombies from other games. Make no mistake however, the Molded are very dangerous and even when you block their attacks, they can still pack a punch. Much like zombies from the previous games, the easiest way to kill the Molded is to shoot them in the head. Although the Molded are pretty scary, the scariest enemies are the Baker family who follow you around throughout the house. There is just something scary about a regenerating old man who follows you with a shovel or ax screaming, “Ethan, Eeethan, EEEEEEEEEthan.” 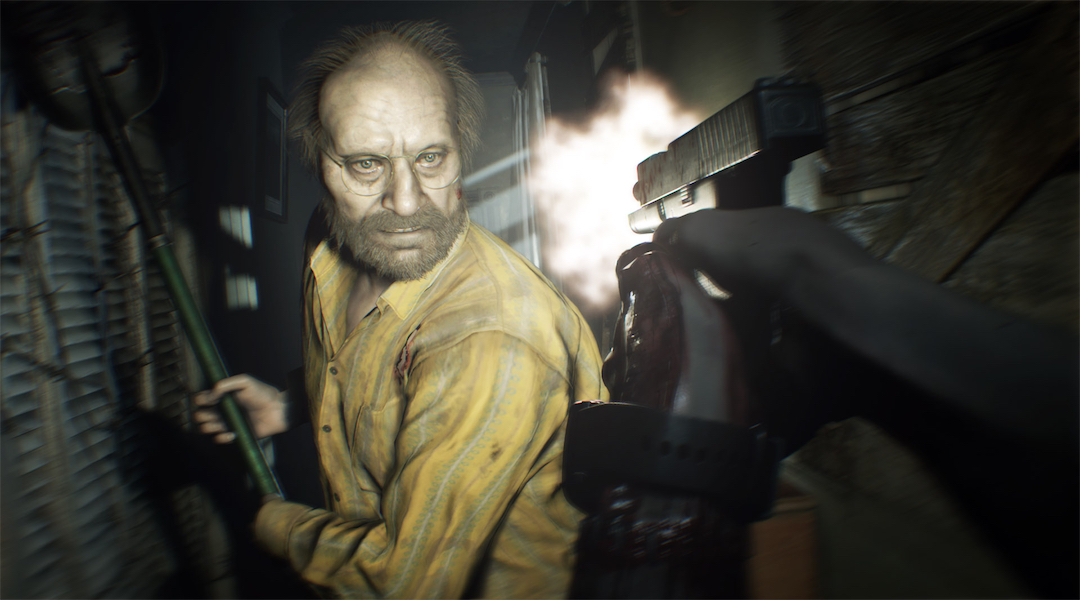 The game also features an item management system. This means that you can only carry a certain amount of items on you and must store things in boxes. This is much like the older resident evil games that featured storage boxes and item management. However, one thing that didn’t come back are safe rooms. Safe rooms were places that you the player could store things, save, and stay out of danger. This didn’t come back in resident evil.

Since the game is in first person, the game is a lot scarier. Furthermore, it is a lot harder to aim since you are in first person and the main character does not specialize in fighting like many characters before him. While you are moving, your hand moves and when you are hit, your screen moves. This makes it hard to fight enemies while on the move. Jump scares are improved because of first person.

Overall, I think this is a good game that provides many scares and a challenge. This was just what the Resident Evil  series needed to save itself from what the disappointment that many thought was Resident Evil 6. This game deserves a 9.5/10.