Originally, Death Note was a Japanese manga turned into an anime. The anime revolved around a high school student named Light Yagami who finds a supernatural notebook. This notebook gives Light the ability to kill anyone he knows by writing their name in it. Throughout the anime, Light tries to rid the world of evil by killing all of the criminals in the world, staring with the criminals in Japan and calling himself Kira. However, a detective known as L tries to stop Kira.

On August 25, 2017, Netflix released a live action movie version of the anime. In this version, the story revolves around high school student, Light Turner who also finds a supernatural notebook which grants him the ability to kill people. Throughout the course of the movie, this version of Light also tries to rid the world of evil. This was the only similarity the movie and the anime had in common. The rest of the movie was faced with problems making the movie not worth watching. 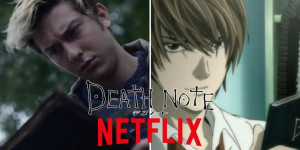 The second problem was that Netflix tried to fit a 37 episode anime into one hour and forty minutes. What made the anime so fun to watch was the fact that Light was working with the police in trying to find Kira. The movie completely ignored this important aspect of the anime and just stood with Light killing people off. The anime kept viewers on the edge of their seats, while the movie did not.

The last problem was that the acting was not very good. While watching the movie, one cannot take scenes seriously. In some scenes, the movie tries to create an early mood, but the acting makes one want to laugh or cringe instead.

Overall, this movie was not like the anime at all. The only similarity they had was the death notebook itself. Everything else from the characters to the plot was completely disrupted. This movie is not to watch for someone who is strongly into the anime.