As you can tell APB is a pretty small school, containing around 500 students. When passing period comes, all 500 students come out of class and fill up the four hallways APB has. The two vertical hallways, from Ms. Edelman’s class to the vending machine, the hallway measures: 186.6 ft by 11.8 ft. The horizontal hallways, from the printer to Mr. Snyder’s room, the hallway measures: 178.11 ft by 11.9 ft. These numbers may seem big, but in reality it is pretty small. I personally measured the hallways and made sure to not miss an inch because every inch counts.

Every year a class leaves, making room for another class to enter with more students. This just results in more and more crowded hallways, making it hard for students to get to class on time. Students wander around in school in pacts of friends, making the hallways get more compressed. With hallways being crowded students tend to bump into each other, often causing tensions to form up. APB has students ranging in all sizes, from smaller then average to taller then average. Often when the smaller students wander the hallways, they are more vulnerable to be pushed around when students try to push through and get ahead of the crowd.

APB may be a small school, but the hallways are smaller. When speaking to Mr. Reed he mentioned that the new school’s hallways are going to be smaller then APBs. With this information being told to you from a senior, I feel bad for all you students who are going to be in that school. 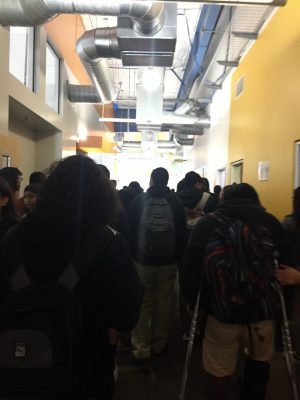