If you really want to play a game with your family, the Nintendo Switch system has plenty of games to play with. To the average parent you may not know what game to get to enjoy with your family. There’s many of these games such as 1-2-Switch which was released along with the Switch system itself.  1-2-Switch is a family friendly party game for the Switch that can be played with 2-4 players. It has many types of mini games with things like simple ones like Ping-Pong or the strange ones like milking a cow. 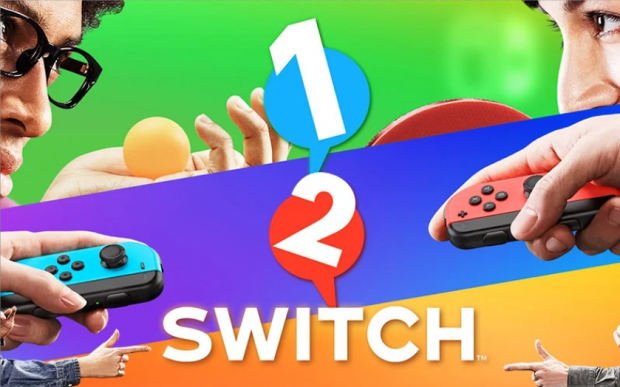 Now, one may be wondering how that can work. Well thanks to the Switch’s joy controllers and HD rumble feature, people are able to play these mini games. The HD rumble feature is a tool where controllers can attempt to copy the movements of objects such as in the mini game “Ball Count.” When you play, it’s important to have a lot of players because like in a party, it’s more enjoyable. Why not share a good thing with others? The mini games are played with the joy controller’s motion controls and it’s infrared sensor. There’s no need to memorize confusing buttons if you’ve never played a video game. It’s even friendly to your grandma! It even includes a short demo video to show you how to play. This allows the player to get a better understanding.

What I’d say what makes these mini games fun is the added factor of the game that recommends you to make eye contact with the other person. That sure brings out giggles when you play “Wizard,” “Sword Fight” and a special favorite of mine “Milk” where you try to milk a cow, believe me you’re going to die of laughter. However, the fact that the game  just acts as a tech demo for how the Nintendo Switch works. It’s unappealing that it’s starting price is $60. To get the best bang for your buck, you’re going to have to wait for the game to be sold either in-store or online.

Consider yourself lucky if you can get the game under $50. It’s a peculiar case for this game. 1-2-Switch is a lovely game with charm despite essentially being a tech demo.