Russia is trying to invade Ukraine, Biden and Zelensky are trying to talk it out meanwhile the people are living in terror. On January 19, 2022, Joe Biden had a conference in the White House referring to the invasion that Russia plans to make on Ukraine to take back the lost territory and rebuild their Empire.

The United States and Russia have always been two major countries with enough power to damage the world severely.

Both countries have been in many conflicts and wars and now with this new issue, it may cause a huge change if Russia successfully invades and conquers Ukraine.

For Putin, Ukraine seems to be the key to reconstructing the Soviet Union or to expand the territory of modern day Russia by force. To this date, the Russian military has been pushing their soldiers closer and closer to the Ukraine borders. Numbers show that at least 100,000 Russian soldiers were deployed in the past week.

The Ukraine president is urging world leaders to talk down about the invasion to avoid any unnecessary casualties or any disagreements with our major countries.

The decision of President Biden has been a debate for many people in the country because for obvious reasons, our country is not economically prepared to go to war again. The US has been one of the countries in the world that has been the most negatively affected by the pandemic and people are not mentally prepared to go to war. Some people might support this because “we are the most powerful country” but honestly the US is not ready for this again, the people aren’t ready.

“Our country is going through a lot dealing with the pandemic, so I think that we need to put our attention here, on the other hand…what do we risk as a nation and as a world if the soviet union comes back? So I think Biden really has to make a pro’s and con chart, about what are the lesser two evils,” 12th gradeEnglish teacher Ms Magdaleno said.

Ukraine is under a lot of pressure right now because they have been invaded by Russia before which is more fearful than ever because even though they say it’s not their intention they are slowly making it. The government in the Ukraine has to keep control of the situation and their citizens, this is complicated for everyone in the country because now they’re at a risk they might have to go to war.

The US is interfering with this invasion because they are trying to prevent a major disaster towards the world and themselves. And not only the US should worry about this but other countries that are around them, because what Russia is trying to simplify by this is to turn those new countries such as Ukraine into a community party too.

“The United States has often believed that it has an important role in preserving peace and diplomacy around the world, particularly with regard to aggressive nations like Russia, whose interests are often different than ours. While I think the Biden Administration definitely prefers to use diplomacy rather than military action, they may feel like it is essential at some point to use the military,” said senior Economic and Government teacher Mr Snyder.

In others opinion this might not be a calming news to hear, knowing that the country might go into a possible war people are getting worried and concerned of the president’s decisions. “The US has already tried to stop the Soviet Union, now Russia and before in the cold war, and the tensions have not stopped and it seems that if we don’t stop this right now we can go back to cold war tensions” said senior English teacher Ms Magdaleno. 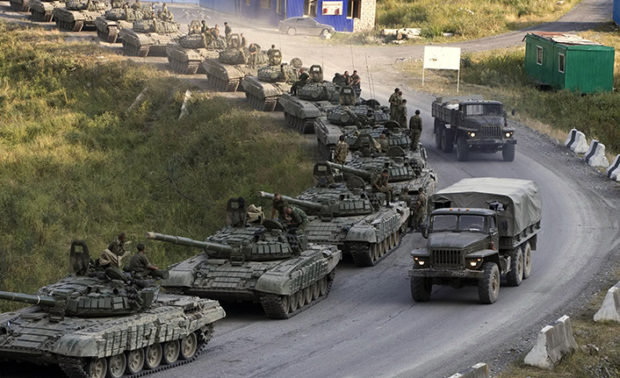 Russia is preparing their troops to move closer to the border of Ukraine a little more everyday./World Bulletin

The invasion of Ukraine is affecting their people because they are at risk of losing the place they feel safe living. The people are living in fear that Russia will take over and they will have to live under their control. They have only had their independence for less than 50 years, which is not a long time.

“It reminds them that everything they fought for to make their country democratic is at stake, it is kind of sad to think that people enjoy only 50 years or less of being a democratic nation, their voices and vote won’t count anymore,” Ms Magdaleno said.

We can help the people of Ukraine by offering support or giving them resources that they are having trouble getting a hold of too. Being able to help the people doesn’t necessarily mean economically but we can help by staying informed or offering moral support.

Ms. Magdaleno said, “ The more you stay informed, concerned citizens can encourage their local lawmakers to act in the defense of these people. If we don’t know about it, we can’t say anything about it; the more we know- the more we can advocate.”

The most effective way to stay informed about other countries is by reading articles from credible sources.

“I generally think the best way for a citizen to engage in an issue like this is to begin by getting educated using reliable news sources—the New York Times, LA Times or Washington Post to learn more about the issue.  After that, it might be a good idea to share information with others in person or over social media” said Mr. Snyder.

Ms. Magdaleno connected the invasion of Ukraine with the unit she is teaching to her students. “ As a civilian, I think it is my responsibility to continue listening to the news and teach my students about these things. Russia going into Ukraine is colonization and if Russia goes into Ukraine that is going to change “home” for all of those people. Also teach my kids how to sync that information themselves because as people of this world it is our responsibility to know.”