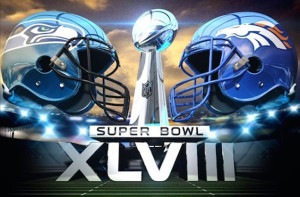 Sunday February 3 marked the end of a fantastic NFL season with the match up that people wait for every year: The Super Bowl.

But before we get into the Super Bowl, let’s see how each team got to such a position. Here’s a quick recap of each team’s road to Super Bowl XLVIII:

Coming into the season both the Broncos and Seahawks were seen as potential contenders for Super Bowl XLVIII. The Broncos, coming out of the preseason, were ranked number 3 on the power rankings while the Seahawks were ranked number one overall. As the season progressed they remained among the top 5 in rankings. Both teams had been flopping up and down among the power rankings till the last week they were the top 2 in rankings. The Broncos had the best offense in the NFL at the end of the season while the Seahawks had the best defense in the league, not to mention one of the best seen in some time. Denver was seen as a huge offensive threat as quarterback Peyton Manning set offensive records for passing touchdowns with 55 and passing yards with a total of 5,477. Seattle’s defense had been impressive all season long stopping every teams offense. They were a force to be reckoned with along with their so called 12th man at home, which is the way they referred to their fans who would go out and support them at every home game. 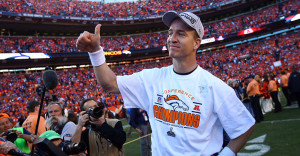 Peyton Manning after beating the Patriots in the AFC Championship

In the AFC divisional round Denver played against the San Diego Chargers and won while Seattle the New Orleans Saints. The following week were the conference championship games. Denver had home field advantage as they were set to play against the Patriots, to whom they had blown a 24 lead in a heart-breaking loss in week 12. The Broncos got off to early lead, again, but this time they  managed to hold on to the lead as they beat the Patriots 26-16. In the NFC championship game, the Seattle Seahawks found themselves playing against the San Francisco 49ers for the 3rd time this season, each team having won once before. The NFC game had been anticipated by many as the 2 teams have been going back and forth in what has become one of the biggest rivalries in the league. The 49ers started off strong, taking a 10-3 lead into the half. Then, in the second half, the Seahawks came back and won 23-17. That set up both the Broncos and the Seahawks to play  in Super Bowl XLVlll. 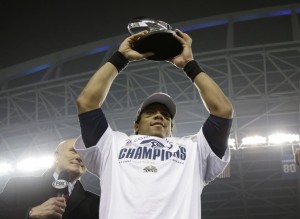 Russell Wilson after defeating the 49ers in the NFC Championship

This year’s Super Bowl featured both of the playoffs number 1 seed, not to mention the best offense in the league versus the best defense in the league, along with a battle of generations, pitting veteran quarterback Peyton Manning against up-and-coming quarterback, Russell Wilson.   It featured the Seattle Seahawks vs the Denver Broncos. All of this created a giant hype in anticipation for the Super Bowl, since this was obviously was going to be one hell of a game right? Maybe not…

The match was a blowout. The whole game was dominated by the Seahawks, from the first 12 seconds of the game to the end of the game. There were some good stats for the Broncos, as Peyton Manning did break yet another record by completing 34 out of 49 pass attempts, the most completions by a quarterback in Super Bowl history. Also, Demaryius Thomas caught 13 passes from Peyton Manning, breaking the record for most receptions in a Super Bowl. Other than that, it was all dissapointment for the Broncos, who were only able to musker up 8 points in the whole game, and those points came right at the end of the 3rd quarter, going into the 4th quarter. 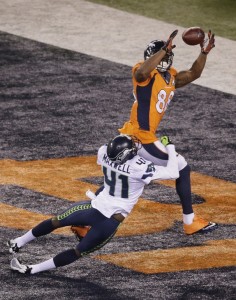 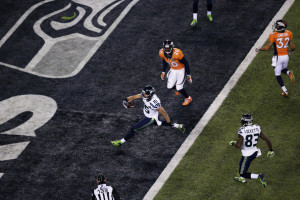 Putting actual match highlights and stats aside, though ,there was yet again another unforgettable moment outside the match, coming to us from none other than Peyton Manning’s own brother, Eli, who was up in the stands watching the game. He was just there minding his own business, when the cameras were pointed to him and we all got to see another of his famous “Eli faces”. 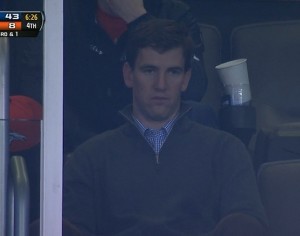 APB’s own student, senior Abram Yrigoyen, is a New York Giants fan, and he commented on his favorite quarterback’s face, appropriately in the Giants’ own Metlife Stadium. “He does make very funny faces, but he is still very attractive”, he joked. When asked his thoughts on Peyton Manning’s loss, he said “I’m sad. That loss takes away from the Manning legacy. But it felt good looking at Metlife”.

Overall, the Super Bowl was a tad bit boring, but it did have it’s moments, like the first ever final score of 43-8, another infamous Eli face, an absolute destruction of the Denver Broncos, and a sort of disappointing game by Peyton Manning. I figure that unless you’re a Seahawks fan, the whole game can be summed up in Eli’s face.