Is this the End of Literary Magazine? 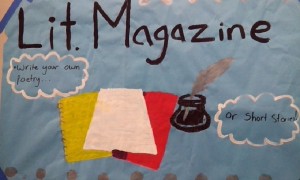 Within the few weeks of having Literary Magazine, students were enjoying the club and sharing their poetry with others. More and more students joined Lit Magazine to express their thoughts and emotions through poetry or short story. Overtime, students were becoming more comfortable and confident about their poems and sharing it to everyone. After two Fridays without the club, Ellie Herman came back with the bad news telling everyone who arrived at the club that she will no longer be able to run the club with us. Some students were shocked by this news and heartbroken.

“I was so shocked when she departed from the club,” said Linda Noriega, who participated in Literary Magazine.

“Yeah I was a quite surprised by this”, said Alexis Alcala, who also participated in Literary Magazine, “I don’t know what will happen to the club but I know that Jose is up to something.”

He is talking about Jose Cervantes, senior in Animo Pat Brown, who would not let this club to die in vain. He is currently planning on a secret mission to resurrect the club. There will be a president, vice president and two or three editors who will help with the club. Each of these leaders have their separate role:

The President of Literary Magazine will be in charge of the meetings, organizing the club and certain events such as reading, writing, Open Mic, etc. It is his or her responsibility to inform participants about meetings and reminders during the club or by email. The president is also responsible of setting up the club and prepare in the next meeting with editors and the vice president of Literary Magazine. Most of all, along with the vice, they would have to plan and prepare for the major events on Lit Magazine.

The Vice President of Literary Magazine will be in charge of continuing on with the club if the president is absent. He or she will also discuss events and send emails to students if the president can’t attend the meetings after school. Just like the President, the vice president will begin meetings with sharing poetry and/or stories. Every meeting, the vice is responsible to share poetry from different poem websites that can inspire the participants.

The Editors of Literary Magazine, on the other hand, are the voices of their decisions along with the president and vice president. Although they won’t access to the class email, they can organize and overview poems that were sent in from participants and students in APB through a box. It is their responsibility to uphold their status and cannot miss more than two meetings, otherwise they will be dropped from their positions.

This club is available to anyone who would like to join or if students are unable to attend, they can actually send their poems for the magazine. Not only students can only send their poems but also their art for the cover of the book. Even if Ellie Herman is not able to be in Literary Magazine, she can support the club. This isn’t the end of the Literary Magazine, but it is only the beginning of a “new” club with a whole new settings.