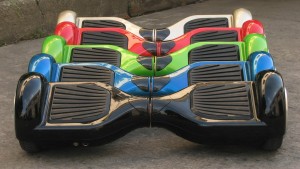 Have you ever seen someone riding a hoverboard due to their laziness of walking their way to their destination? Will it be beneficial to bring hoverboards to school besides skateboards and bikes? Hoverboards became extremely popular and eventually, students will be willing to bring their hoverboards riding around during school.

However, riding a hoverboard to school can be very risky. There were multiple videos that involve hoverboards catching on fire and people getting severely injured by riding a balanced two-wheeled motorized board. Some universities and social locations banned hoverboards for safety precautions. Since hoverboards have a very high risk of fire hazards, now Metro and airlines are considering to ban them for good.

For the safety of all students, will it also be intuitive to ban hoverboards from APB before anyone brings it on their way to school? Despite the dangers of having hoverboards, some students believe that hoverboards shouldn’t be banned from APB.

“I think they should not ban hoverboards, says Jose Cervantes, senior in Animo Pat Brown,” unless several students get injured using them.”

Students who are bringing their hoverboards can possibly put our school in peril. It can also have a high chance of hurting themselves and others. Although, some students don’t have any problem with the risk of riding the hoverboard in school.

“I don’t think it’ll be dangerous to bring a hoverboard to school”, says Elmer Garcia who is a ninth grader in Animo Pat Brown, “I believe that it is a fun way of getting to where they want to be.”