While Junior Diana Zarate is immensely engaged in her Algebra 2 midterm, she hears a loud thud that soon is repeated, again and again. This noise being repetitive as it is, becomes a distraction and she begins to wonder where this extremely annoying nuisance is coming from. Distractions like these are present in almost all her classes and has became a usual annoyance. Once this noise fades away she continues to work hard on her midterm. Once her fourth period class is over she goes to roam the hallways to her 5th period class, but while doing so, she notices a CSO at the foot of the door. Diana quickly questions why a CSO is basically guarding the restroom. “Someone punched a hole into the wall in the boys restroom,” a friend tells Diana.

Although there are many people that feel the same way as Diana, many other students here at APB simply do not care about the destruction going on in the boys restroom. For instance, Senior Ruben Carrillo said, “Okay, I do scream in the hallways during class time but like I feel like it’s not always me. I know some people that do scream in the hallways, but I mean I’m not gonna name them.” As for the hole in the wall, he does not care for it but is annoyed at the same time. He believes that boy’s simply just did it to be funny.

Cielo Aguilar, a junior, said that she thinks they punched a hole into wall maybe because they were 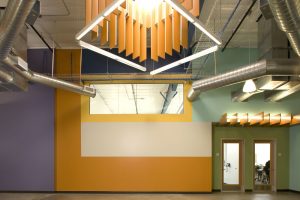 fighting, and thinks that boys distracted people the most in hallways.

Mr. Garcia, the CSO said he wants to find the person who punched a hole in the wall, and make them pay for it. He said they might have punched the hole, “to look cool in front of friends.” Many students thought similarly as Garcia and many believe that boys are the main distraction in halls. When we asked Mr. Garcia what gender was the main distraction, he also said it was definitely boys. Mr. Garcia also said that the restrictions on restrooms would continue until the end of the semester. 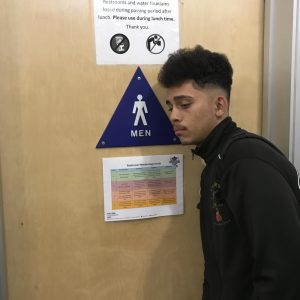 A different opinion came from junior, Bryant De la Cruz. He said “I think that it was bad but I just feel that all the boys shouldn’t have gotten punished for it.” He also said, “They probably thought it was funny or just wanted to impress a friend. It affects me because my restroom has a big hole in it, obviously. Not only that, but I have to hold back my urine for an extra 30 minutes since we can’t go the first 15 and have to wait another 15 minutes.” Lastly what was mentioned to us was that boys won’t have enough time to use the restroom considering that they only have 40 minutes to go to the restroom.

Overall, there were many students that did care there were also many others who didn’t. Whether you use the restroom or not you should still care because this is your school, the school in which you will spend four years at. Everyone at school should also take their peers into consideration, as Bryant stated, it is not fair that all the boys get punished for it. The school also shouldn’t have to worry about spending money on fixing a hole in the wall when they could put that money to a way better use. We should take care of our school instead of damaging it and making it worse. Besides the new unfair restroom policies and the money it will cost to repair the damages, it is also very distracting to classes near the boys restroom such as Mr. Griffin and Ms. Yakota. To the boys punching holes in the wall, we kindly ask you to stop doing that, it is not funny, neither will that get you anywhere.