On March 14, 2018 many of Animo Pat Brown students were part of a peaceful protest to  honor the memory of the 17 victims who were killed during the Parkland school mass shooting. The point of this peaceful protest was also to state their opinion towards gun control and many students are on board with idea of gun reform. Many students decided to walk out and protest to express their opinions but there were also a majority of students who stayed in class because some didn’t feel that by walking out it would not have any effect on the cause.

Many students took part in this peaceful protest, students of all grade levels. One student who decided to walk out was a freshman,Anthony Garcia, who also was part of organizing it and he shared a personal story about his sister being a victim to the Vegas shooting. When we interviewed Anthony and asked him what were his thoughts on the step-out, he answered, “I think it was very well organized with the help from everyone who took part in promoting and addressing the topic.” We also asked him how he felt about the awareness there is about gun violence and the dangers that guns bring into our world. He responded “ More should be done to spread awareness and in participating in this nationwide event it is a good way to spread awareness.” Anthony believes that little events like this one can make big changes because not only are we speaking are thoughts but we are also warning those around us and trying to make it safe not only for ourselves but for everyone surrounding us.

One student that decided to not walk-out or take part in the protest was a senior, Victor Patino. Since Victor was one of many students who decided not to walk out, we asked him why did he not participate he answered, “ I did not participate because it isn’t an effective use of time, would have been better to be done at lunch, it wouldn’t had been used as an excuse for getting out of class.” When asked about what he thinks should be done to prevent another shooting he responded, “ I believe people should not only pay attention to guns but also look into the mental health of students who are being bullied.” In questioning other students about the walkout most students students told us that they did not participate because they believe that our school would  have any effect to the topic. In discussing this topic to one of APB’s teachers, Mr. Sandoval, told us, “ the walkout brought awareness to students and this can lead to bigger things such as going to the march to prove that we students and teachers feel unsafe.”

Overall, the walk out was a success because a majority of Animo Pat Brown students walk out and joined outside in the grass field to listen to some students personal stories and also were told a bit of information about the 17 victims who were killed during the shooting. This step out may not have been on the news but this could be the start of getting the congress to start making changes. Also, it was a way to show support to the families who lost a loved one by giving a moment of silence and respect. This is a way to start making changes for everyone’s safety if they want to maintain guns than a change of laws has to be made in order for people to feel safe whenever they are out. In other words, people who own guns must be able to handle being around guns and use it only for a good cause and guns should be kept out of those who are not trusted. 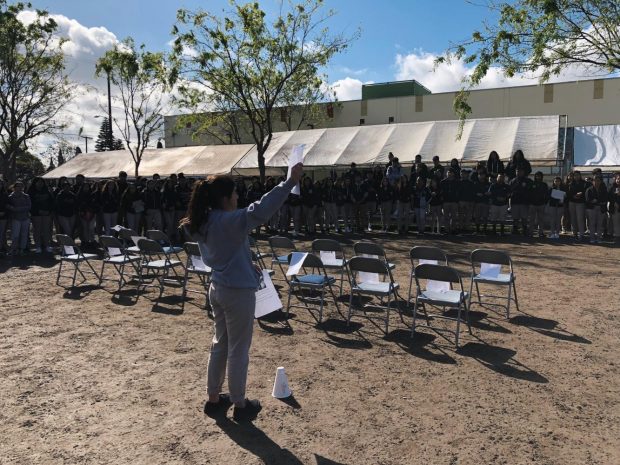