The annual 11th grade Northern California field trip was this past week. Forty-eight juniors were selected to participate in this years three day trip. The day of the departure was on Sunday, April 6, 2014 at 10:00 a.m. The forty-eight students were divided into two tour groups, one group was made up of 23 students and the second one was made up of 25 students, each tour has two chaperones. Mr. Batten and Mrs. Reyes were the chaperones for tour 2 and Ms. Tran and Ms. Melh were chaperones of the first tour.

It was a six hour in half drive to get to Santa Cruz, making one short stop in Lost Hills, we soon arrived at our hotel in Days Inn.  Later on in the afternoon all the students and staff took a break and were taken to downtown Santa Cruz enjoy the stores and restaurants. By 9 p.m. we were back at the hotel and by 9:45 p.m. it was light out. The next morning it was an early departure from the hotel to UC Santa Cruz for the first tour and presentation.

After the tour in Santa Cruz finished, it was time for the two groups went their separate ways. Tour one went to the University of the Pacific and tour two went to CSU, Monterey Bay.

University of the Pacific 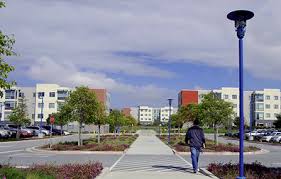 The next day, we were still divided in our two groups. The first group departed to UC Merced and afterward they went to CSU Fresno. The second group departed to San Luis Obispo to Cal Poly then finally UC Santa Barbara. Now it was time to return to Anmio Pat Brown and prepare to go back to school the next day.
This experience may have brought clarity to what the APB students may want in their future and brought understanding the college life and all the requirements that will be needed to be summited into one of these amazing schools. This trip is a major advantage that only a select few were able to participate in and it will be an experience that will be put into play when our soon to be 12th graders apply to colleges next year.
Entertainment, Features, News