What is Dia de los muertos you may ask, it’s a Mexican holiday. El Dia de los Muertos is usually two days long, it starts November 1st and ends November 2nd. This tradition started 3000 years ago as a ceremony by the indigenous people. It’s a ritual that Spaniards said mocked death when they first saw the indigenous people performing this routine. The holiday is part of the Catholic theology but also is a basic principle of the Aztec ritual. The Day of the Dead is celebrated in a variety of ways depending on the part of Mexico each person is from and the background from each state of Mexico.

On November 1st we celebrate all Saints day and the day of the children. This is celebrated by many Catholics, in which they attend mass to remember all the saints and their stories also to thank them if you are named after a certain saint. If one prayed to such saint to guide and help through problems one faced one would also honor them this of the year. Then on November 2nd we celebrate the day of the dead. Which is often celebrated by families going to the cemetery to be and visit their loved one to leave flowers mainly Marigolds. Where as these flowers represent grief of losing your loved ones. Candles are also lit to guide our loved ones to our homes. Another way one celebrates the Day of the Dead is through dancing, which is called Folklorico. In which Senior Kathy Rocha’s  younger siblings are part of Mixteco a folklorico dance group.

During this celebration many altars are made at churches and homes. The altars contain Marigolds and candles. Alters also include sugar skulls, breads and other variety of food for the weary spirits. For children or angelitos, toys and candy are added to the alter. Whereas for adults they add shots of alcohol called Mezcal and cigarettes. In general the day of the dead is a time in which families celebrate the arrival of the deceased, it’s a special day in which one commemorates those who passed away. 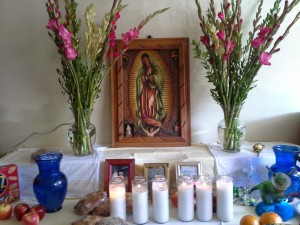 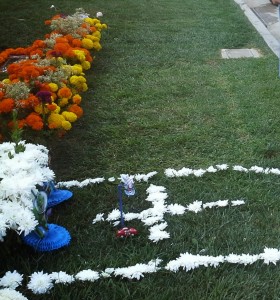 It is common for students on the APB campus to have an altar at their home. Yadira Carrillo, sophomore at APB ,tells us that every year for a long as she can remember her parents have been celebrating the day of the dead. Her altar is decorated of flowers, candles and incense. When asked how does her family celebrate el Dia de los Muertos she responded “By making a lot of Mexican foods like mole, arroz con leche and tamales. Along with pictures of our loved ones who have passed to the afterlife”. Food and drinks are provided since spirits are said to be exhausted from the journey. For the children who have passed away, toys are usually provided. Yadira says that this year similar to the last, “Something special we will be doing this Dia De Los Muertos will be placing toys for our baby nephew who passed away a year ago”. She also mentioned going to the cemetery to decorate his tomb with marigolds and toys. 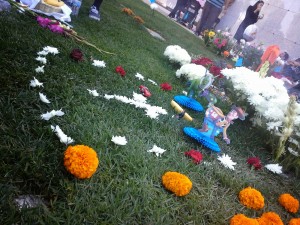 Features
One comment to “What is celebrated during Dia de los Muertos?”