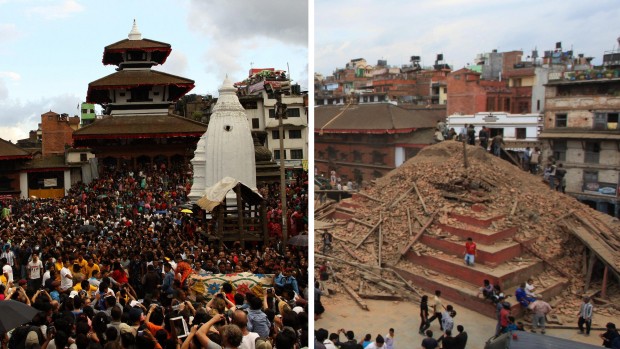 A before and after picture of Kathmandu’s Durbar Square.

Recently, on April 25, Nepal suffered from an intense earthquake with a magnitude of 7.8 which caused the destruction of many historical buildings and many casualties. Multiple aftershocks occurred after this huge earthquake which caused much more destruction. A few weeks later, on May 13 Nepal suffered from another earthquake with a magnitude of 7.3 causing more harm to the country. For those of you wondering Nepal is located in the middle of India and China.

These detrimental earthquakes have caused much damage to the community and the people. It has been reported that there is about 8,000 fatalities and about 19,000 people injured. Many people have been missing due to the buildings collapsing on top of them. These earthquakes were so powerful that they knocked out many buildings. Some buildings were completely destroyed and some were partially destroyed. Historical buildings were destroyed such as, the Vatsala Durga, the Kathmandu’s Durbar Square, and the Swayambhunath Stupa. Also, many famous temples and monuments collapsed. 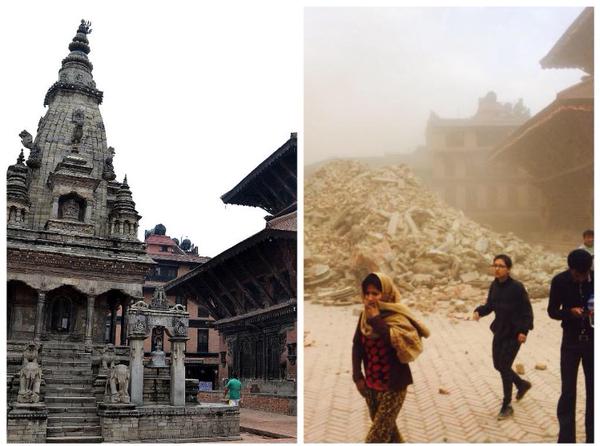 A before and after picture of the Vatsala Durga temple. 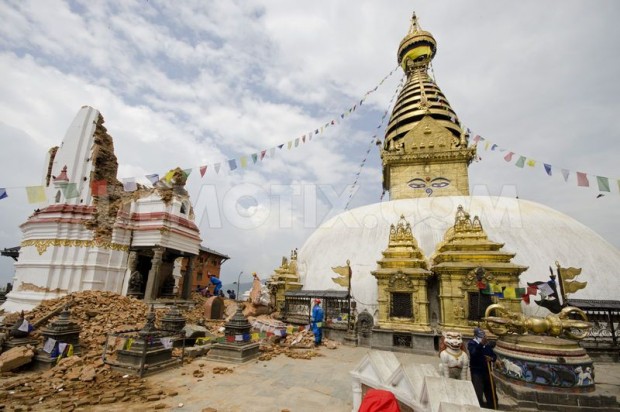 What the earthquake did to Swaymbhunath Stupa.

Indeed, Nepal is at its worst at this point due to all the deaths that occurred and all the people that were injured. Nepal’s people are in need of help to build back up their community. Therefore, the United States is taking action and is trying to help Nepal recover by providing them with supplies and donations. More specifically, the U.S. Air Force sent two Boeing C-17 aircrafts to help the rescue mission in Nepal. Additionally, the United States gave Nepal an additional $9 million in aid for the earthquake. However, there is still much to be done everyone around the world could also help by making generous donations to provide relief.

Everyone around the world has been impacted by this huge earthquake, it makes people question when is the next earthquake and where would it happen. This earthquake influenced many people to start preparing for the next earthquake. Many people had different reactions towards this earthquake. Kevin Hernandez, Junior at APB, said, “When I first found out about the earthquake in Nepal I was shocked just like the rest of the world was. It brought many memories to my mind like what happened in Haiti.This earthquake made me realize that we are not prepared for an earthquake with this kind of magnitude because our infrastructure could not handle such kind of catastrophe.” Similar to Kevin another student had similar views of the earthquake in Nepal. Sigifredo Soto, Junior at APB, said, “When I first heard about this earthquake I was very devastated because so many people got hurt and were killed. Then later on I began to wonder if California was ready for an earthquake of this kind of magnitude. I realized that we are not ready for this because not everyone has all the supplies that are needed for an earthquake because some people do not take this serious. Furthermore, some buildings are very fragile and could collapse easily.” Many people believe we are not ready for the huge earthquake. Do you have all the supplies you will need in case of an emergency? Please leave your comments below. 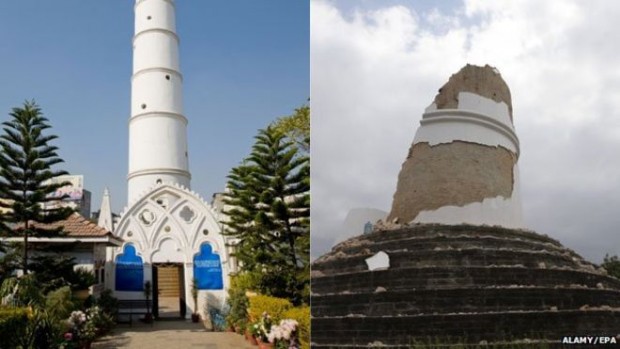 A before and after picture of the Dharahara tower.