The destruction of the earthquake in the movie.

The movie San Andreas is about a huge earthquake impacting California with a magnitude of 9.1 leaving many people dead and many cities completely destroyed such as, Los Angeles and San Francisco. San Andreas was released on May 29, and it’s been estimated that they have made about $123 million over the weekend. The main characters of this movie are Dwayne Johnson, Carla Gugino, Alexandra Daddario, Ioan Gruffudd, Archie Panjabi, Paul Giamatti, and lasty, Hugo Johnstone Burt.

The rock, one of the main characters in the movie.

The plot of this story is how Raymond (Johnson) a Los Angeles Fire Department rescue member is trying to save his daughter that is in San Francisco. The first earthquake of the movie started in the Hoover Dam, here two scientists made a prediction of where the next earthquake was going to hit next and were right, however, only one survives because one gives up their life in order to save a little girl. The next earthquake was in Los Angeles which caused major destruction leading to many buildings collapsing and many people dead.The following earthquake was in San Francisco here is where the most damage was cost, this city was hit by an earthquake and later on by a tsunami. Raymond’s daughter Blake was stuck in San Francisco when the earthquake happened because she was with her mother’s boyfriend Daniel here she met two brothers that stuck with her to the end because Daniel left her stuck in a car in order to save her life. Here they try to save their lives until the end.

Indeed, this movie gives some people an idea of how the big earthquake is going to be when it really happens. San Andreas is similar to the movie 2012 both of these movies contain much action and are both related to an earthquake. Although, 2012 is basically about the world ending, while San Andreas is mainly focusing about the destruction in two cities. However, some critics say that the movie was dumb and was too over dramatic because there is no way an earthquake with that magnitude could impact Los Angeles. 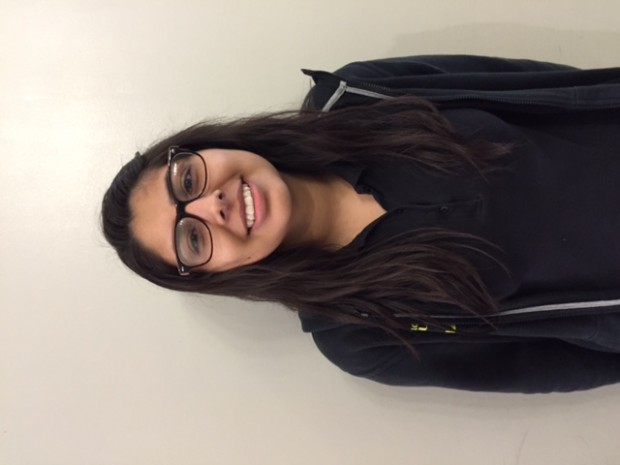 Berenice Carranza, student that was interviewed.

Overall, this was a good movie that was very entertaining many students have similar thought however, some completely oppose it. Alicia Cortez, junior at APB, said, “Based by the trailer I believe that the movie has a lot of action and will be very entertaining and might frighten some people because it is similar to what might happen in Los Angeles. I believe that an earthquake with this kind of magnitude could impact us since  we live so close to a beach. Additionally, I believe I am prepared for the big earthquake that is expected to hit Los Angeles because I have can food and water bottles that will help me survive. Plus, I already know what to do if a earthquake happens.” Berenice Carranza, junior at APB, said, I think this movie is similar to 2012, where a horrific natural disaster occurs. This movie ignites fear on many people since it dramatically demonstrates the outcomes that an earthquake in California may result in. The San Andreas movie is not accurate in my opinion and is over exaggerated and shouldn’t be watched.This film was made upon entertainment which is not appealing or great in my opinion and where the outcome is very predictable. I don’t believe an earthquake with this kind of magnitude could happen because according to research, the highest earthquake that can possibly occur in California is about an 8.1. Although, it is unlikely for such kind of earthquake to occur, I believe it is important to be ready for an earthquake. I am personally not ready for an earthquake of such kind of magnitude, but I plan to prepare myself as well as to influence others .” Are you prepared for such kind of earthquake?