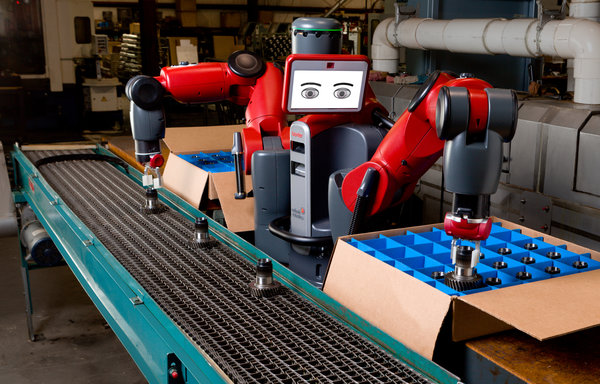 In today’s world, robots are frequently being used in different work forces. The work forces that are most commonly worked by robots are those that are repetitive. For example, producing items or just packing groceries in a grocery store. With the technology becoming more and more advanced, many fear that robots will be able to do much more. Robots were thought to just be a threat to  manufacturing jobs, but as time passes, many believe that robots will be able to take white collar jobs such as: lawyers, teachers, etc.

We can see see how robots have effect in the manufacturing workforce in a hardware store that has a working robot that helps customers find products in an aisle. Instead of having  a real humans do this, robots are now doing it. The United States in particular, has had this advancement for years now. Throughout the years advancement has and will accelerate more and more to come for the jobs that are more high standard.

Robots are being modified each day to add different features to make them  more useful. They are becoming more flexible and are being able to  have good vision. With these new things, the robots will be  able to do much more than just repeat steps over and over. New movements and eye vision, will make robots have the chance to do such things as teaching or moving boxes back and forth from a pickup truck. With something that doesn’t get injured or tired, work will be a lot faster.

Now having the knowledge that robots will possibly be able to take over jobs in a near future, many are afraid of the threat. Martin Ford, the founder of Silicon Valley-based software development believes that robots with the new technology can succeed in taking over white collar jobs.  Ms. Cox, a technology teacher at APB said, “I don’t think that’s what will happen… I don’t think it necessarily will be robots replacing teachers… I think the bigger concern is what’s going to happen as robots take over pe

ople’s jobs and what jobs then people will move  to, I really think the big question is, as more and more robotics take over people’s jobs what then happens”. When asked if she was embracing or being fearful of the advancement in technology she said, ” I’m a technology teacher, I’m not fearful, I love it! Think about the amazing things we can do surgically instead of relying on a persons hand to be able to do everything”. Ms. Roselman, a chemistry/physics teacher said, “Well I never want to say it’s not possible, but we have to think about who programs the computers. I think certain jobs can definitely be replaced do I think all jobs can, no. I think there’s a human element that we like when we go to a place that a robot can’t fulfill. Like you like to be greeted you like someone in a personal level to be to you and the human interaction is really important and that will be lacking”.