What Are Young People Saying In 2015?

Teens around the nation switch from their normal English language and use trendy words and phrases. However, it is negatively impacting students in the classroom.

These trendy words phrases, such as “bae” and “fleek” are extremely popular, especially among teens. They have switched from formal English to a more “cool” and popular language that has spread across the country. Teens see this as a fun and positive thing, while teachers claim it’s affecting their education.

These trending words and phrases are raising questions such as why are they used so often? Where do teenagers learn them from? A few problems that arise is that does this affect students in the classroom?  Slang words and phrases do die off and become forgotten, however new and trendy slang words come every once in awhile.

The difference in the way students write and talk at home and school is slowly narrowing. The way students communicate and text each other has slowly been brought into the classroom across the country. Slang and acronyms such as “TBH,” “Fleek,” and “SMH” usually show up in assignments and frustrating teachers do not how to fix this reoccurring problem. 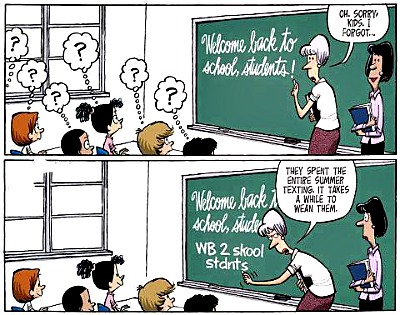 Teachers are stating that students do not use capitalization or use correct grammar anymore, and students don’t realize it. People argue that slang or shorthand language is breaking down the levels of communication. However, teachers are baffled because they are obviously not familiar with the language and their job is to advance students’ writing skills, but it seems as though the students are burdening them.

Being asked on why slang words are used, a couple of seniors at APB had similar responses, “Slang is used everywhere now, it’s how we communicate, and it saves up time.”

The major problem is that teachers are trying to work with students and advancing their writing skills, but their communication is so limited that this might be a really big problem for students who are eventually applying for college applications. Admission officers, state that they are receiving essays they have never seen before. Students need to be more observant and careful for what words they use.