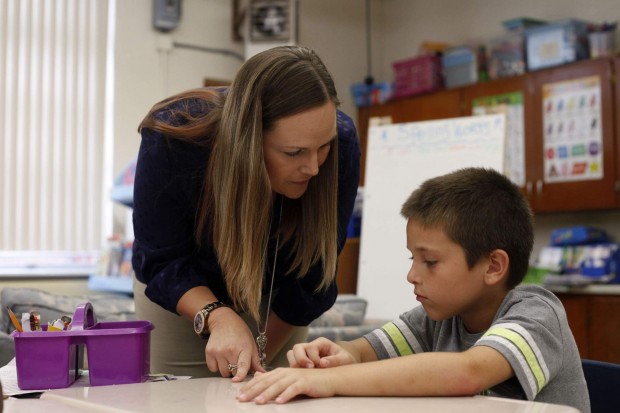 There are many students who act up in class and cause disruptions, bothering people around them, including the teachers. Teachers take action by sending the student out of class or to the office in order to “handle” the situation. This causes the student to be suspended very quickly and some even get expelled for these mere actions. Despite the fact that it is very beneficial sending the student out because it helps the others concentrate, is it okay for teachers to take this kind of decision so quickly? Teachers are supposed to be trained to deal with these kinds of students but it seems as though they no longer want to try so they just send them away in order to avoid the entire confrontation.

Every year, in every class, there is always at least one who student who disrupts the class and causes a hassle for the teacher as well as the students. Lately, many student have been sent out of their classes for bad behavior. Jose Muñoz is a senior who has been sent out of the class and placed in the office for the period. He was disrespectful to Ms. Schaefer and so she sent him to the office as punishment. Jose admitted that it was right for her to send him out, “I did cross the line so I guess it was right for her to send me to the office.”

An anonymous senior spoke about a situation that they went through that he did not find entirely fair. “I was sent out of class because I was fooling around and talking back playfully with a student. The teacher got irritated and sent me out.” Anonymous found it unfair that only they got punished for something that the other student was doing as well.

An anonymous senior said, “ Suspension is useless because some students will not change and do the same action again and again. Also, there is no message when suspending kids they do not learn from it.” For the most part students are not learning from their bad behavior however, for some students being suspended for numbers are days is like a award to them because they won’t be coming to school for number of days. At the end of the day the students might end up facing some of the bad consequences besides being suspended is missing a lot of work and having to catch up this is why school should look for new answers in how to deal with bad behavior in future occasions.

Some students feel that their behavior is reasonable when getting suspended or kicked out of class however, schools and staff think otherwise. Ana Quintero, a APB junior, mentioned how she was kicked out because she was defending herself from a girl who was saying false information about her and she was just telling the girl that she shouldn’t say anything. She got kicked out of class, as she mentioned, “I got kicked out of class because according to teacher I was causing trouble when I was just defending myself. I believes that students should be able to defend themselves against other students and teachers when someone says something that is not appropriate.”

Ana believes that APB should change what the policy is when kicking someone out of class or even suspending them because something is can be for the most unreasonable reason for why that student has to go through that process. Some students feel that the school is not doing everything they can because they try to find one source to blame for the behavior that is going on, “I was not doing anything. I got blame for most of the behavior than she did when she was bringing her friends towards me. Also, we had a meeting with the staff in order to talk about what happen but the girl who was involved as well was not even there in the meeting.” Instead, of looking for other ways to avoid this kind of conflict most students get blame or in trouble for something that was not hundred percent their fault. Greendot schools around Calfornia need to fix how students are being treated when getting in trouble and if the discipline is fair enough and not so extreme, it will make students feel that schools are doing something to help them out when having an issue at school.

Melissa Roselman, APB’s Chemistry teacher, feels that suspension’s are a very delicate form of discipline, “It really depends on the student, if the student is not happy in school then it is just a chance for them to go to the beach”. In addition, Roselman feels that there be some sort of option to choose between an in school and out of school suspension.“It happens a lot that a good kid is at the wrong place at the wrong time and then it would be bad for them since they are missing out on class time,” says Melissa Roselman.

Suspension has been around for a long time in attempt to discipline students for extremely bad behavior. However, as time progresses, it seems as though suspension is used as a way for teachers to just get rid of students who are disrupting the class; even when the disruption isn’t so severe. Many students feel as though there are many suspensions occurring that are unreasonable.

Furthermore, many of them feel as though suspension brings no kind of effect whatsoever. Have suspensions become ineffective because teachers use it as a way to avoid confrontation? What should we do about the students who do not react to suspension? Is there any method that can really discipline any and every student? Perhaps we should pay more attention to the methods teachers use in their class to deal with disruptive students in order to prevent so many suspensions. Something must be done about the students behavior in order to reassure that each student is benefiting from the school’s lessons.