ÁPB has become a safe haven for stray cats. Custodian Martha, along with many other teachers, have been feeding the cats since they were kittens. Now, they are all grown up and worry has arisen between the staff and students, “What will happen to these cats in the future? Who will continue to feed them? Will the cats continue to be fed? Who will watch over them?” and so on.

Londy Hernandez, Ninth grader, was not aware of the cats living in our 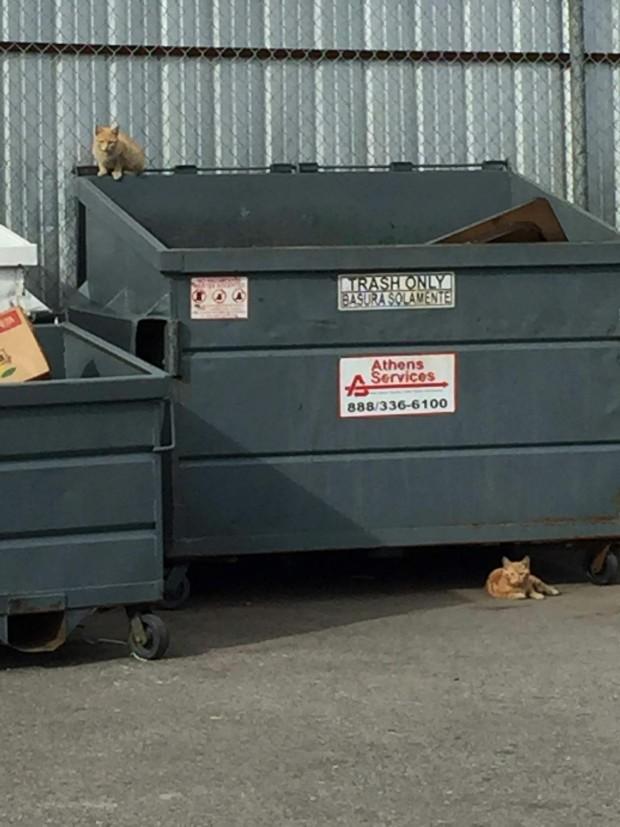 dumpsters, but she thought that it was nice that teachers were taking the time to feed the cats. She explained, “We should keep them, they are causing no harm.” The same thing was said by her peer, Jorge Lazo. He said, “We should keep them because they have nowhere else to go. Plus, they are not causing harm to anyone.” So far, these cats have not done anything to physically harm alumni or school property. Students who are allergic have not come in contact with these animals to a point where they have an allergic reaction or where they hurt the animal itself.

Though the majority of the ideas remain pro dumpster cat, there is a slight contrast towards the majority. ÁPB tends to be known for having a good image, as they have been raved about many times. Many begin to argue that keeping dumpster cats can cause ÁPB’s reputation to go down. Sophomore, Abraham Espino, argued that keeping dumpster cats gives the school a negative visual appearance. “It’s disgusting”, he says. It makes the school look bad, knowing that animals can be seen crossing the fence.

Senior Alexis Ortiz says, “It doesn’t make the school look bad because it shows that we care about animals. We should put more effort into positively solving the problem”. He went onto explaining that these animals are used to being alone and not depending on anyone, so if we chose to move them to another place it could cause a ruckus in someone’s home.

Robert Daniell, Physics and Biology teacher recommends that many adults should make an attempt at sharing their home with these cats. It gives the school a villainous image, so we should find a home for these cats.

Ninth grade english teacher Christina de la Garza actually tried to catch the cats and bring them to her neighbor because she takes in cats without a home. Ms. De La Garza says, “If they (the cats) stay out in the streets, they will reproduce and we’ll have more stray cats without homes.”

With her collecting the cats, the chance of this school having more cats to deal with is lowered. She also explains that having stray cats on campus is not sanitary and will most likely result is transmitted diseases.

It is still unclear what is going to happen to these dumpster cats, though many people don’t mind them staying, but many people also want them gone due to health issues. What should be done with these cats? Should they be removed? Or should they stay?