By: Leonides Martinez and Cassie Rodas 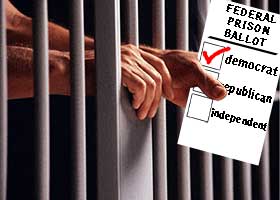 ne you committed a crime near the time for the presidential election. Due to what you have done, you are now a state felony and you are told that you can no longer vote. How would you feel knowing that the government has the right to take away your voting rights just because you recently became a felony? How would you feel knowing that from that point on, you may never vote again in your life?

Becoming a felon is a big deal to the American people. Felons have been convicted of a crime under the categories of murder, rape, arson, burglary etc. It is because of these reasons that many believe that felons do not deserve to use their first amendment. Those against felons voting believe that those convicted of crime have shown bad-judgment, which proves them to be unfit to make good decisions, especially choosing the nation’s leader who will make a change in the next four years. Evelyn Pacheco an APB senior said, “I think that ex-felons should be allowed to vote even though they been in prison. Everyone deserves a second chance and so do they as well.” Hector Flores, an APB senior had the same thoughts as Evelyn in the sense that felons should be given a second chance, ¨I believe it’s unfair because they are human. Besides, they paid their dues in prison. They are out for a reason, they deserve another chance. People change.¨ Ex-felons no matter what they have done they deserve another chance and opportunities to prove themselves. 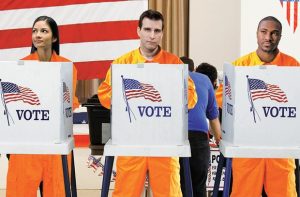 Throughout the United States, there are only two states that allow prisoners to vote during and after their sentence is done. Even though the United States is known as the country who treats everyone equal and respects their human rights no matter what race, ethnicity, or who they are, there can be cases where this is not actually implied. Evelyn said, “I do not think it is fair because they should get a second chance to prove themselves to the people that they can vote with mature behavior.” Some people believe that ex- felons should not be isolated from the rest of the world just because they have made bad decisions or mistakes in their life. Everyone should be treated equally because everyone makes mistakes; some are simply just not charged under the same kind of crimes.

The government or the state should not be allowed to take away the first amendment from felons just because of their actions. However, there are many reasons why states believe that felons should not be allowed to vote. They take into consideration that the felons are isolated from the society for a while and do not watch the news to keep up to date. Hector believes that felons should be given the chance to vote because he acknowledges the fact there are many citizens that do not know what is occurring within the presidential debates, ¨You cannot blame a person for what they find interesting. Many citizens do not actually vote because they care but rather for what others around them vote for. You can say that about many groups of individuals. I do not believe it is true[ that felons do not have the mind capacity to vote], because it is not the case for everyone.¨ States should try an experiment so that they can see what the results will be if they actually allowed ex-felons to vote. Evelyn suggested, “ They should allow felons to vote for one year if it does not work then decline it. States should try it out then just not allowing them because they are just assuming that ex-felon would make bad decisions and they would not know until they actually do it to see.”

People claimed that ex-felons are not capable of choosing the nation’s leader. However, this is not actually true because every person is different and not every felon has committed the same extreme crimes. Evelyn said, “It depends on the individual state of mind. People I know that have come out of jail think more wisely and clearly so when people come out of jail they have a different mentally.” People are not all the same even though they been to jail. Additionally their experience makes their mentally different, Jennifer Carlin an APB senior said, “No, I believe they do think more clearly especially if they had a bad experience in jail they will want to vote for a better nation leader and better-improved laws.” People experiences are what makes then changes to something better in the future.

Felon disenfranchisement is a very controversial topic within the people of the United States. This law exclusion people who are able to vote if they are convicted of any criminal defense or restricted depending on what class of crimes the felon falls into. Furthermore, even after completing their sentence some states have restricted them to vote as well. Many people have said they should be able to vote because it is their right the Bill of rights. It has been said that these fundamental rights of an individual that can not be taken away. Other argued that that is the right thing for the country because they can make decisions affecting the people of the United States because they do not think clearly. States have clearly throughout about letting ex-felons or felon vote but it is the very controversial issue since it can go both ways. What do you think, should ex-felons have the right to vote?