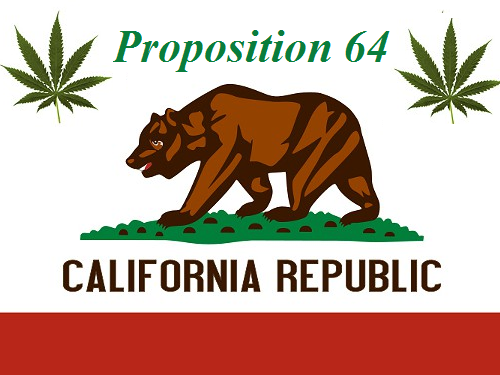 As the election was important in the United States,  here in California the citizens went to polls to vote for the propositions of the state had that are very critical for the state’s future. Propositions are sets of laws that the state legislature propose to the citizens, in this case the  Californians got to vote for things they want or do not want in their communities. This year, the California legislature proposed 17 new laws for the people of California. Some important propositions were the legalization of marijuana, background checks for guns, death penalty, and the use of condoms in adult films. Specifically, Proposition 64 was a controversial law since many were either against it or for it which created many arguments. Although the efforts to avoid this law to not pass, the legislature legalized the use of Marijuana with limits such as being 21 or older, can have up to six plants of marijuana in a private home that is not visible to the public, and possess 8 grams of concentrated Marijuana. Many have thoughts and opinions of this law such as teachers and staff at APB.

Although Prop 64 is one of the most important propositions that passed, it might manage to have a lasting effect on people around the community in the future. Mr. Griffin, noted that it will better the economy for the state, he believed it will be, “Putting money in the right place, gain money for the city”. Although Mr. Griffin thinks it’s something good and beneficial to our state government, Mrs. Ramos believes legalizing marijuana is a health risk for the surrounding areas and for children. Mrs. Ramos worries about her children’s risks, says, “I don’t like my kids being exposed”, which made her be alert about her own children safety but she also believes that the tax money will go to programs that could help the communities we live in. Lastly, the legalization might also bring health benefits to others said Ms. Yokota. According to her view, she says that she has friends that consume Marijuana and says that it does “help them a lot”. There are clearly many pros than cons that affect people’s decisions on the matter.

Proposition 64 will benefit the lives of many people after being legalized in California. The legalization of Marijuana will drop the number of incarceration rates because many citizens have been convicted for carrying more than an ounce of marijuana without having a prescription from a doctor. The legalization will also improve California’s economy by adding tax to the sale of marijuana and the state government will benefit and gain more money.