Transgenders restrooms have become the spotlight of the LGBTQ community since the controversy of gender neutral restrooms at schools and in public buildings.What is a gender neutral restroom? A gender neutral restroom is a unisex restroom that people of any gender or gender identity may use. However, this issue has kept growing and even has gotten the attention of the U.S government. President Trump, whom agreed to keep  a gender neutral restroom in the White House that was established by Obama, believes that this problem is a state right issue. Here in California, that has a state law about transgender teens and adults that are allowed to go into any gender restroom that they identify themselves as. Also the second largest school district in California, Los Angeles, LAUSD, has the same policy. Recently last year of 2016, Santee Education Complex high school, located in South Los Angeles, opened its first transgender restroom in the school(shown below). Despite the difficulty of achieving this goal, it was accomplished by petitions and posters that expresses “It’s just a toilet”. Here at APB, there are two men and women restrooms but is it necessary to have a gender neutral restroom for the student body? 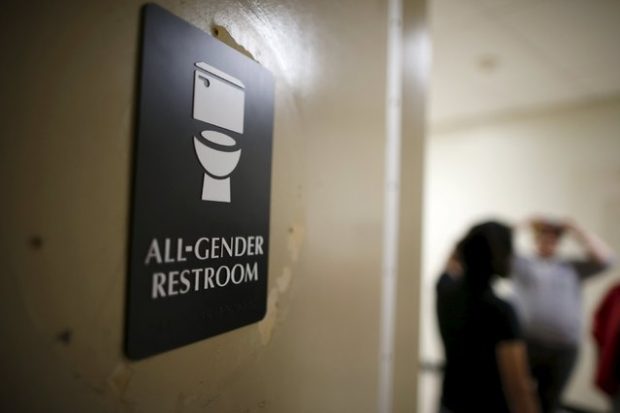 During this week, we acknowledge that students from APB, seemed to support the establishment of the gender neutral restroom. Yuliana Lopez, a junior, believes that any transgender person should be allowed to enter whatever restroom they desire to. She also states by establishing this restroom it won’t “Make anyone uncomfortable because all they are doing is using it and leaving”. Within this Yuliana thinks that the government should enforce the transgender rights so it can create a protective and safe environment for them and others at school. In addition, Viviana Hernandez who is also a junior at APB, feels the same way as Yuliana. Viviana said that by placing this restroom it shouldn’t make a person uncomfortable because the person who uses the restroom is still a human being that just feels a different way from its body parts. Sophomore, Liliana Rodriguez, feels likes having a transgender restroom will be “Wierd” but yet she claims that she would not mind by the establishment. She expresses, “Equality no matter what!” and seems to be okay with the restrooms at APB. Another sophomore by the name of Joseph Zapata had similar views on the matter stating that “transgender restrooms would be a smart idea because it would eliminate yet another constant struggle the LGBTQ community has to face”. The overall majority of APB students are very supportive of the transgender bathrooms idea making it an even greater possibility here at APB sometime in the future.

We also managed to get the staff’s perspective on the issue including Mr. Ramos, Ms. Jang, and our Principal, Mr. Reed. Overall, the staff seemed very supportive of the idea of gender neutral bathrooms and the LGBTQ community as a whole. Ramos stated that gender neutral restrooms would be “ideal” and would help student’s “mature quicker” through experiencing and even supporting these type of situations as well as benefit the gender queer students in the process. Ms. Jang, on the other hand, believed that its not necessary to have a gender neutral restroom since she thinks that transgender students should use the restroom of their choice depending on their own gender identity. Although both of these individuals have different perspectives on how to take on the situation, they seem to come to a consensus that is for taking appropriate action to help the LGBT community and it’s people. Principal Reed had his own ideas on the matter involving the gender neutral restrooms and the student body as a whole. He believes that it is important to “comply” with the law and the students first, before building gender neutral restrooms. As of today, no one has brought to his attention the need of a gender neutral restroom influencing his decision to hold up on the process of building one. However when the question arose that student may feel uncomfortable to have members of the opposite sex  in the same restroom, Reed responded that 99% of the time students will do the right thing and it depends whether the students are aware of why we have gender neutral restrooms. In order for the students to feel comfortable with having the restroom, they have to accept the fact that not everyone feels comfortable entering to a men and women restroom.

Overall, there are different perspectives on staff and students at APB but it seems to connect everybody and create a support system for the LGBTQ community and have a good mindset on welcoming a transgender restroom. Though it can be expected to create problems, it would  still will bring a safe environment to the transgender students and other LGBTQ members. If we do take action to install these restrooms it would be the first step to normalizing the LGBTQ community and minimize discrimination towards the community itself. In other words, these restrooms could be the first step we take to treat the LGBTQ community how they’re supposed to be treated; like human beings.