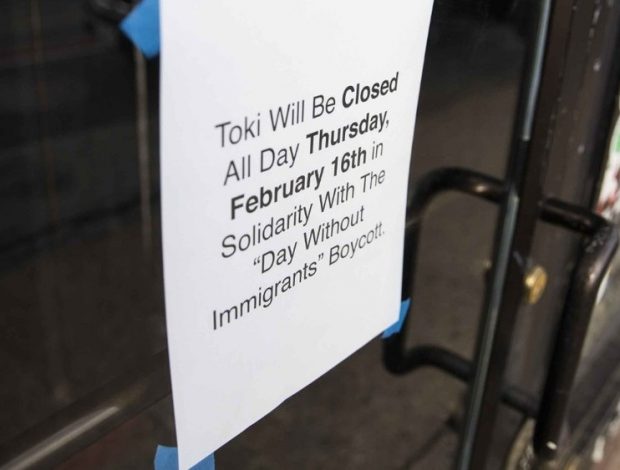 Donald Trump’s goal is to get rid of all the refugees and illegal immigrants out of this country as soon as possible but that won’t be easy as he think it is. There are obviously way too many immigrants in this country and the economy is built on by them, without them there wouldn’t be anything. Many undocumented people and citizens decided to strike on Thursday, 16 of February in order to show Trump and the rest of the people what a day without immigrants would look like if there wasn’t any of them working and running their business. This day was called, “A Day Without Immigrants”.

On Thursday, 16 of February, many didn’t attend school and didn’t go to work in order to support immigrants. Most restaurants didn’t open because they too wanted to support their co-workers since most of them are Latinos or undocumented people. Although many thought this was an unintelligent thing to do, it made a difference in many places. It had a huge impact here in Los Angeles since most undocumented people live in this area. Many people are being affected with this policy of undocumented people being deported because they’re afraid of being separated from their families and friends. Student, Jacquelin Mares stated, “My dad was deported a year ago and he was in the process of becoming a citizen. I.C.E goes looking for a certain person but at the end of the day, they end up taking everyone who’s undocumented.”

People protested on the streets showing Trump what America would like if he were to send all undocumented people back to their hometown. The people wanted to show him that what he was doing was wrong, this economy is built by them because let’s be honest, not one single citizen would do the job that undocumented people take on. Not one citizen would want to work in the field on a hot sunny day and not winning the minimum wage. Sophomore, Elmer Garcia, stated, “Trump is protecting white people from immigrants but at some point everyone who came here had ancestors who came here illegally as well. Trump is scared because in the future white will become the minority while African Americans and Latinos will become the majority.”

Many undocumented people come to America for a second shot at a better life and not come here to steal jobs from somebody else. Many undocumented people hustle in order to provide enough for their families or for themselves and it’s tough when they’re in a country like this. All the negativity they receive from others and racist comments, they still manage to continue working and do their best to provide enough for their families and themselves. Senior, Aldair Rojas, says, “As an immigrant myself I’m feeling kind of scared because I don’t want my family to be broken up or other families as well. I feel that other families are worried because they’ve worked so hard and sacrificed many things just for it to be taken away.” Undocumented people come to this country for a better life and a second chance at a better opportunity, they don’t come here to cause any problems or look for war against other people.