Short of breath, senior Gregory Chaparro finds himself tripping over his own feet to rush to the door. Hoping he has arrived on time he looks up at the clock which reads 8:02 AM. Disappointed with himself, he receives a thirty minute lunch giveback that’s sure to waste most of his lunch time. Now with Animo Pat Brown’s new tardy policy, Greg and every other late student at APB will only receive a fifteen minute lunch giveback when they arrive ten minutes late to school.Therefore, students would serve their detention without wasting close to all of their lunch sitting in uncomfortable silence. 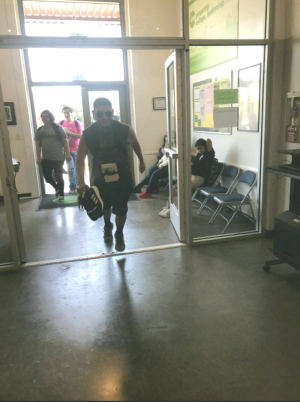 Greg running to get to school on time.

school after 8:00 AM. An abundance of students were discontent with the old policy that was in place.

Junior Kimberly Rivera said, “It is unfair to lose thirty minutes of lunch, which is almost the entire lunch period, when you came in to class maybe less than five minutes late.”

Senior Jairo Echeverria said, “With students, there are things that stop them from getting here on time. Sometimes there is traffic, or something happened with their family.”

Jairo thought the old policy was unfair because student life outside of school prevented them from getting to school on time.

For years, students just like Kimberly and Jairo complained about the tardy policy by continuing to express that it was not fair.

APB staff members have constantly received complaints about the old tardy policy. Eventually, the staff took in consideration what the students wanted.

A new tardy policy has been established at APB that allows students to only serve fifteen minutes of lunch giveback if they come before 8:10 AM. Anyone who comes after that has to serve the full thirty minutes.

When asked about why the policy was changed, vice principal, Ms. Brown said, “We wanted to be responsive to students and the feedback that we get from them.”

Additionally, Brown argued that with the old policy, students would purposely be more late once they realized it was already past 8:00 AM. Brown hopes that with this new policy students are motivated to come earlier instead of later to school.

Brown said, “This would create some motivation to get kids here quicker even if they saw they were already a few minutes late to school.”

Teachers every day have to deal with the tardiness of their students, but what do they think about the NEW tardy policy?

She explains that there are cases such as kids missing one or two minutes but then realizing that they have to make up thirty minutes of lunch give back, so they decide to miss even more time. Although, she feels that it is too soon to tell whether there is a dramatic change, she definitely feels that it is fair for the students.

On the contrary, 9th grade technology teacher, Ms. De la Garza feels that it won’t affect the number of people tardy because as she said it’s their, “personal choice whether they arrive on time or not.”

She implies that she liked the old policy better because it’s not fair for the other students that arrive on time. Although, there are two different perspectives, both can agree that there has not been a change yet. Other teachers might have the same if not different perspective of the new tardy policy.  Until then, the new tardy policy will continue to become part of Animo Pat Brown’s new regulations.

Overall, students favor the new tardy policy because they were pleased with the fact that staff members took in consideration their opinions. Students felt that their voices were being heard at school. They appreciate the fact that they will not serve thirty minutes of lunch giveback if the occasion occurs that they come late between 8:00 AM to 8:10 AM.